Activities to Work on Linguistic Competence at Home

It's important for children to be able to clearly express themselves verbally. In this article, we're going to recommend some games to work on linguistic competence at home. 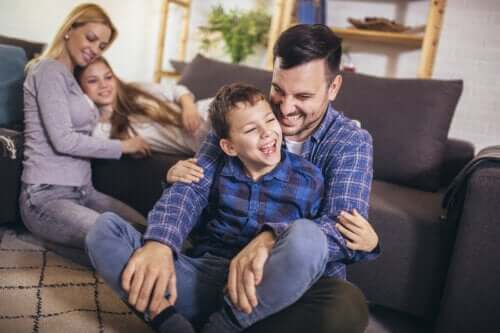 Linguistic competence consists of using language appropriately in order to communicate and interact with other people, both orally and in writing. This is one of the basic educational skills. But how can one work on linguistic competence at home? Here are some activities to help your children achieve this goal.

Activities to work on linguistic competence at home

If you put the activities and games described below into practice, then your children will be able to develop verbal expression, quick thinking, attention skills, social skills, and other abilities that are important for their development.

You’re about to find out how to have a great time as a family, while your children work on their language skills!

“Words can be like x-rays if you use them properly – they’ll go through anything. You read and you’re pierced.”

To start playing, participants have to sit on the floor and form a circle, so that everyone can see each other’s faces clearly.

One of the players has to whisper a question to the player on their right, and that person then whispers the answer back to them. That player then has to ask the person on their right a question and they whisper back their answer. This process is repeated until the circle is complete.

After everyone’s had a go, each participant has to take turns to say out loud the question they’ve been asked and then say the answer they’ve received. Of course, the questions will have nothing to do with the answers, and this can be quite hilarious.

Before starting the game, participants must establish an order to follow, so that the first player says aloud: “I’m going on a trip and I’m carrying in my backpack a…” and complete that sentence with the name of an object, for example “ball.”

Then the next player has to repeat this phrase, but has to remember the object said by the previous player and add a new one to the list. The players keep going, adding one more object each turn, and the sentence gets more and more complicated. Finally, one of the players won’t be able to remember the list of objects and the game ends.

In this game, the players have to say several different words – about four or five should suffice. Then, each player has to invent and write a sentence or a short story in which they have to include all these words.

Set a time limit (about two or three minutes) and, once the time is up, read all the phrases or stories aloud. A person who isn’t playing can act as judge and decide which one is the best and most original. Or, alternatively, the participants can all vote on who the winner should be. The winner can also be decided on the basis of speed, i.e. the participant who finishes writing first is the winner.

To carry out this activity, someone chooses a letter and says it out loud. You then set a stopwatch for one minute. During this time, the participants have to create a sentence that contains the largest number of words that begin with the previously selected letter. For example, if the letter “c” was chosen, then an example sentence would be “Chris eats candy with his classmates.”

Once the time is up, each player has to say aloud the sentence they’ve written and count the number of words that begin with the letter in question. The participant who creates the sentence with most words starting with the chosen letter wins the round. This person will then choose the letter for the next round and the game continues until you choose to finish.

In short, as you’ve seen, there are numerous options for games and activities to work on linguistic competence at home with your children. All you have to do is use your imagination and set aside time to have fun with your family while you learn. What are you waiting for?

Theories About Language Acquisition
In the following article, we'll take a close look at some of the most well-known theories about language acquisition in children Read more »
Link copied!
Interesting Articles
Games and cartoons
Why Do Children Love PAW Patrol So Much?