The Relationship Between Boredom and Creativity

It's important to allow children to become bored in order to stimulate the development of their innate creative abilities. Today, we'll go more in depth regarding the relationship between boredom and creativity in children. 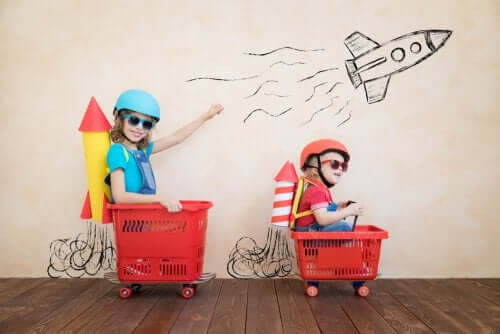 We can affirm without a doubt that boredom stimulates creativity in children. Every day, we find ourselves increasingly immersed in a culture that pushes us to keep our children in a constant state of activity and entertainment. However, according to educational experts and psychologists, this can get in the way of the development of their imagination.

If children become bored, then they’re able to begin inventing their own creative fun. It allows them to see things in a different way. In other words, in the future, the ability to think freely and have time to be bored can produce artist and scientists that make great contributions to their sciences.

Of course, it’s natural for parents to want to minimize boredom in their children. However, we need to start looking at the tedious in another way, because boredom stimulates creativity. Hunger drives children to eat. Tiredness motivates them to sleep. In the same way, boredom makes children use their imagination to find ways to entertain themselves.

The relationship between boredom and creativity: Research

In 2013, Dr. Sandi Mann – psychologist from the Central Lancashire University in Great Britain – published the results of a study on boredom.

In the study, Mann asked participants to come up with ingenious ways to use two glasses of shaving cream. Mann discovered that participants who had just spend time copying numbers from a phone book had the most original ideas. The ideas of their counterparts, who hadn’t been bored previously, were less original.

Dr. Teresa Belton, an education researcher from East Anglia University, also studies the relationship between boredom and creativity. In her study, she interviewed scientists and artists in order to discover how childhood boredom affected their lives and careers. Many expressed that boredom was a key in their later success.

For example, Belton spoke with writer and comedian Meera Syal and with artist Grayson Perry. Meera Syal grew up in a small mining town where there wasn’t much to do.

“Lack of things to do spurred her to talk to people she would not otherwise have engaged with and to try activities she would not, under other circumstances, have experienced, such as talking to elderly neighbors and learning to bake cakes.”

But, most importantly, boredom brought Syal to write. Syal wrote in a diary from the time she was very young. She filled it with observations, stories, poems, and diatribes. Therefore, she attributed the fact that she’d become a writer to her early diary days. According to Syal, “Enforced solitude alone with a blank page is a wonderful spur.”

At the same time, Grayson Perry also affirmed that boredom is beneficial to adults and children. He told Belton, “As I get older, I appreciate reflection and boredom. Boredom is a very creative state.”

The relationship between boredom and creativity in children: reflection

Without a doubt, being bored is something children need in order to learn to deal with. They need the opportunity to experiment with free time, without anyone telling them what to do. In the same way that a writer looks at an empty notebook, or a painter an empty canvas.

It turns out that the art of reflection is part of learning to deal with boredom. Most children this day and age don’t know ho to be bored. They’re constantly overstimulated by too many activities. They have so much to do every day that they don’t have any free time at all.

Normally, it’s adults who are responsible for keeping children occupied all the time. They have too many toys, too many extracurricular activities, and too many plans to ever get bored.

But the fact of the matter is that children need to become bored in order to find their own ways to not become bored. Boredom drives them to find new activities that they enjoy and things that they like. If parents are constantly providing activities and entertainment, then children will never have this need.

Conclusion regarding boredom and creativity in children

So, the next time your children complain about being bored, resist the temptation to entertain. Rather, send them outdoors or give them a notebook or a box of crayons. You can even give them random objects like tape or glue. But don’t offer any instructions. The things your children do while they’re bored will truly surprise you!

Music Can Boost Your Children’s Creative Process
Music can play a big role in boosting your children's creativity. But how does it do this and how can you help your children develop their creative process? Read more »
Link copied!
Interesting Articles
Tips for raising your child
What If a Family Member Undermines Your Authority