How to Educate Children Without Saying "No"

Children need limits in order to learn to manage frustration. But there are ways to impose them that don't involve saying "no" all the time. 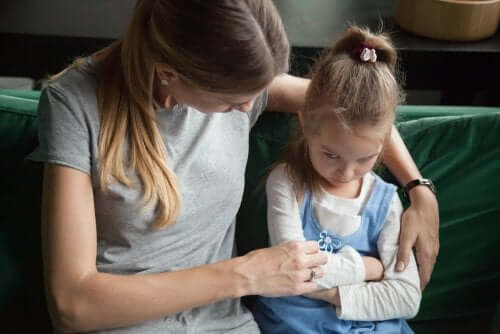 You may be thinking that it’s an impossible mission for parents to educate children without saying “no.” Children need discipline, and if they don’t get it, then they can become tyrants. However, taking the word “no” out of our vocabulary doesn’t mean being permissive or removing boundaries. It simply means a different approach to parenting.

Stopping our children’s inappropriate impulses and denying their inappropriate requests is something most of us do out of inertia. Sometimes a resounding “no” is necessary, but there are many other situations (most of them, in fact) in which we can alter their behavior without having to resort to that word.

Why is it important to educate children without saying “no”?

By inertia, we tend to say “no” to small children in many situations in our daily lives. With a “no” we convey a clear and direct message and hope to get an immediate reaction. However, when we overuse this word, it becomes meaningless. Children get used to hearing it and stop responding to it.

It’s no longer a novel stimulus for them. It’s often one of the words they hear most throughout the day, and, because of this, they begin to overlook it. It’s advisable to reserve this expression for specific and urgent situations when we really need an immediate change of behavior.

If our children are going to act in a dangerous or harmful way, then we’ll need to use a clear and firm “no” in order to stop them before it’s too late. On the other hand, other types of scenarios don’t require as much urgency and make it possible to use other types of parenting techniques.

Another essential thing we must keep in mind is that the goal of education is to teach children to be autonomous. It’s about giving them the values, knowledge, and tools they need to develop on their own. Because of this, a fundamental part of education is to explain to them how the world works.

A simple “no” doesn’t give children much information about what’s happening. It doesn’t tell them why their behavior is wrong, what the consequences are, or what’s expected of them.

If we implement other kinds of educational strategies, then we can share knowledge with children that will be much more useful to them. Why don’t we want them to do such and such a thing? What are the negative consequences of such behavior? How else should they behave in similar situations?

In this way, there’ll be a stronger and healthier bond between the child and the adult. We create trust, and let children know that we’re by their side to guide them, and not only to repress their impulses. When they feel this trust and respect, then it’s easier for children to cooperate and show less resistance and disruptive behavior.

How to educate children without saying “no”

Remember, trying to limit the use of the word “no” in no way implies being permissive or indulgent. It’s all about educating in a more conscious and deliberate way, sharing with children the reasons for refusing and offering them other alternatives.

However, there are also occasions when we do need to say “no.” It’s a matter of differentiating.

Positive Discipline Techniques and Benefits
Positive discipline techniques are all about collaboration. These techniques encourage children and young people to collaborate and participate. Read more »
Link copied!
Interesting Articles
Tips for raising your child
The Role of Parents in Child Psychotherapy