Stop Giving Your Children Everything They Want

You can't give your children everything they ask for. Here you'll learn why and how you can work around this. 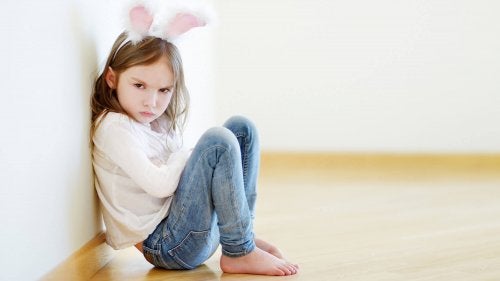 When you find out you’re about to be a mom, there are two things you’ll probably think about: You promise to be better than your parents were, and that your children won’t lack a thing. However, it’s not always a good thing to give your children everything they want and we’ll explain why.

You’re part of the second or third generation of adults who aren’t living with all the limitations of a post-war environment. That feeling of shortcomings is embedded in your DNA, and it will make you want to give your children everything they want, just so they don’t feel any material deprivation.

However, this can get out of control, even if children have more than what they’ve asked for and they get things without even asking for them. Yet now they suffer from emotional deprivation.

The need to give children everything they want

Living your life through theirs

This is what you intend to do when you give your children everything you didn’t have. Many times you don’t even take into account their own tastes or needs; you sign them up for extracurricular activities, events, and even what you think are ideal relationships.

Maybe you would’ve liked to do ballet when you were young, and since you couldn’t, you sign your children up for it. But, what do your children really want?

We’re living in a society where you can have anything you want in the blink of an eye. Your children have grown up in this culture of the now, and, while children have always wanted things now, you need to accept that parents sometimes encourage this.

Don’t fall into that – it’s impossible to want everything, in a few days they won’t even remember it.

Today’s children have super busy parents. Their parents are torn between being the best at work and in life. They’ve got mortgages to pay, dance lessons, and planning a better birthday party than last year’s. All of this can make money run out, which leaves you little time to spend with them.

That feeling of guilt makes you want to give them all of the presents possible. Then the cycle begins again: you need to work even harder, to pay for all of those things.

What happens when you give them everything?

1. They won’t know how to deal with frustration

These are children who have never faced a moment when things don’t go how they want them to, because you’ve always been there to fix everything for them. This isn’t healthy for your children, because you’re taking away a powerful tool for them to face life.

It’s virtually impossible for things to always work out perfectly. If your children don’t learn how to deal with frustration early on, they’ll have a hard time doing so as an adult. This will make them dependent and insecure in the long run.

2. They won’t be able to succeed on their own

Will and perseverance are very positive qualities for anybody to have. But think about what would happen if you were given everything you wanted, without even having to ask for things to get them.

The outcome is very distracted children, unable to focus on one thing or work hard to get it. They don’t know how to fight for what they want, and in the long run, they won’t even know what they truly want.

3. They struggle to adapt

Resilience is a quality that’s connected to the ability to overcome obstacles, to be positive, and knowing how to adapt to change. If you never say no, you’re keeping them from developing the necessary social skills and emotional intelligence.

Helpful advice to stop giving children everything they want

It’s not about saying no because you say so, it’s about being coherent. Knowing what they really need and setting explicit boundaries. Explain to them why you’re saying “no” in a way they understand.

This doesn’t mean they’re going to react in a positive way, but it’s a start for them to learn how to have self-control and to accept that things won’t always go their way.

Give them responsibilities. Let them experience true life, work as a system where each family member handles a chore. They’ll learn how to appreciate things more, to be their own person, and to feel included and appreciated.

Last, but not least, spend some quality time with them. Even if it’s just for a little while, what they truly need is to be with you and for you to really dedicate yourself to them for a moment.