Through imitative play, children begin to understand their surroundings, and learn to function within them. All this happens naturally, and becomes a type of game. 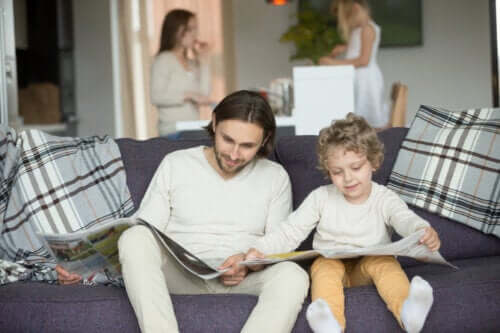 Playing is the main way in which children discover the world around them and learn to interact with it. And, during their first years of life, it’s mainly imitative play that fulfills this function.

Many mothers carry it out instinctively with their little ones, without really realizing the great benefits that these small actions have for the baby’s psychological growth.

The fact is that, by using imitation, children develop congenitally, and begin to socialize and strengthen their empathic capacity. All of this occurs naturally, from daily interactions with their parents and through the games, books or songs that are part of everyday life.

The socializing function of imitative play begins very early on in a baby’s life. When they make some sort of sound and their mother repeats it, then communication begins to take place.

Later on, it’ll be the child who’ll begin to repeat the sounds and gestures that they observe in those closest to them. Through social reinforcement (smiles, compliments, caresses), the parents are shaping the child’s ability to imitate, and they’ll develop and strengthen these skills.

In this way, their first words and simple actions will occur, such as clapping or showing with their fingers how old they are. The basis of social communication is established before the little one can even use words and sentences.

At first, the child’s ability to imitate will be motivated by the desire to attract adults’ attention, even without really knowing what the sounds or gestures they’re making actually mean. But, later on, they’ll start to make a link with what they mean and use them in a functional way.

The role of a child’s surroundings

Imitative play also helps the child get to know the world around them, to discover how objects work, and to acquire daily habits and routines. For example, at first, the little one can brush their hair when they see their mother doing it, they can clean the table while their father does it, and they can pick up the phone and pretend to have a conversation.

This imitation, which at first took place instantly (the mother does and the baby repeats), will start to occur outside of the immediate context. This means that the child can start to imitate words or actions that they’ve observed at some point, without needing an adult to be there at that time.

The child will most likely imitate the actions that are most familiar to them. In this way, they can pretend to cook, change a doll’s diaper, or brush their teeth. By playing, the child is internalizing the use of objects and establishing daily habits.

A further benefit here is that imitative play helps children begin to develop the ability to put themselves in other people’s shoes, and to understand different emotional states. We can achieve this through simple games, such as pointing to the characters in a book and imitating their expressions whilst reading with the child.

Children’s songs can also help us, if we accompany them with mimes that fit the words. For example, clenching your fists and rubbing your eyes when the song talks about crying.

We can encourage the child to acquire these emotional bodily expressions and ask them to repeat them. However, it’s important to accompany this imitation with reasoning and explanations that can help the child to understand what they mean. Children’s books such as The Colorful Monster can be very useful in this respect.

How to use imitative play with children

Imitative play occurs naturally and instinctively between children and the adults around them. However, if we want to enhance its benefits, there are certain things we can pay special attention to.

First of all, it’s important to involve the child in our daily tasks and let them do them with us. You can give them a cloth to “clean” the table with you, offer them an empty pot with a spoon and “help” us to cook… Making them part of the daily routine will allow them, through imitation, to develop many of their skills.

Stimulating scientific thinking in children has enormous benefits. Not only on an academic level, but also in their daily lives…

Tips for raising your child
Why Your Child Get Bad Grades and How to Help?

Why does my child get bad grades? This is one of the questions that we parents ask ourselves when facing…