4 Reflex and Coordination Games for Children

Reflex and coordination games for children help to stimulate their psychomotor skills. Find out more in the following article. 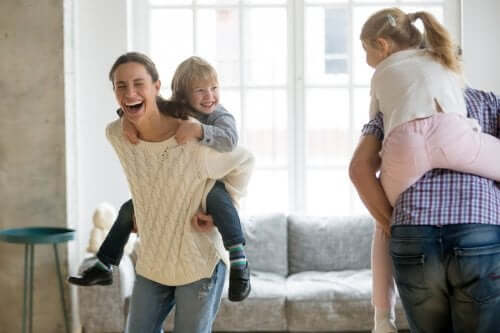 Reflex and coordination games are ideal for having fun with the entire family. At the same time, they help to stimulate and work on certain motor psychomotor skills. In the article below, we’ll recommend several different options. Pay attention and discover how to play each one. We’re sure your little ones will love them.

4 reflex and coordination games for children

This game is perfect for boosting psychomotor reflexes and body coordination in children. What’s more, it also helps develop self-control and concentration.

Before the game begins, you’ll need to choose who will be the leader. Once you’ve decided, the leader will stand up in front of the rest of the players, who will stand in a row facing the leader.

Now, the leader must give the players different orders out loud. For example, jump, run, raise your arms, etc. At the same time, the players must do exactly the opposite of what the leader tells them to do.

Little by little, the actions will become more complicated. For example, the leader may mention a specific body part for the players to use. He or she may say “jump on your left foot”, “run with your right hand on your head”, “raise your left hand”, etc.

If a player makes a mistake, he or he is out of the game and must sit down. The last player standing wins.

This next option on our list of reflex and coordination games is ideal for working with children’s ability to react quickly, their reasoning abilities, and their mental agility. To begin, you’ll need to lay down a string or rope to divide the area into two parts. Then, one of the players will stand on one side while the rest of the players stand on the other.

The person who’s alone on one side must say the words “land”, “water”, “fire”, and “air”. While doing so, he or she will throw a ball in an attempt to touch one of the players on the other side of the line.

When the leader says “water”, “land”, or “air”, then the player who gets hit by the ball must name an animal that inhabits the water, land, or air, respectively. However, in the case of “fire”, the child will have to name an object that’s resistant to fire. If the player can’t think of anything, he or she will have to sit out. The game continues until only one player remains, the winner. If you want to keep playing, the winner can be the next leader.

For the next game, you’ll need two balls and at least five players. The players must stand up next to one another in the form of a circle. Then, one participant will pick up one of the balls, and the player that’s furthest away from him or her picks up the other.

Once everyone’s in their positions, the game begins. That means that the players must pass the balls around the circle to the left or to the right. Any player that ends up with both balls at the same time loses and must sit out. The game continues until only three players are left in the game.

During this game, children practice the ability to control their body movements. The first thing you’ll need to do is choose a player who wants to act as the leader.

The rest of the players must remain standing against the wall until the leader tells them they can start to move. At that point, the players must advance as slowly as possible until they reach the opposite wall of the room. As they do, they must pretend they’re running very quickly – but as if they were in slow motion.

“Children need the freedom and time to play. Play is not a luxury. Play is a necessity.’

6 Mind Exercise Games for Children to Play at Home
Mind exercise games are an excellent way to boost your child's intellectual development. Discover today's homemade games to stimulate your little ones.. Read more »
Link copied!
Interesting Articles
Games and cartoons
7 Paper and Pencil Games to Enjoy with Your Family