How to Stop Your Child from Screaming

If you want to know what you have to do to stop your child from screaming, you first need to know why he does it. Then, you can start looking for solutions and work to achieve those results. 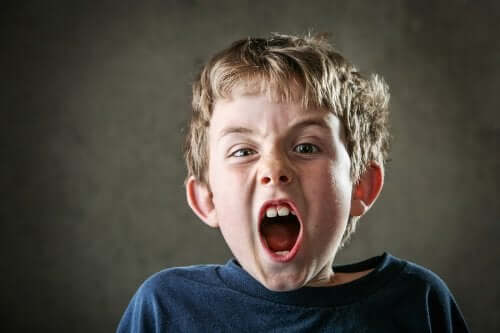 There are kids who constantly scream to express their anger or frustration. Of course, that’s not a good thing. If you’re wondering what you can do to stop your child from screaming all the time, we recommend you read the following article.

How to stop your child from screaming

At home, on the playground, at the store, on the bus… your child constantly screams, and you don’t know what to do to calm him down and help him express himself.

You should know that there are lots of screaming children in the world, and they usually yell to get their parents’ attention. In addition, they also yell to show that they’re angry, frustrated or unhappy.

Of course, there are cases where kids scream because they’re used to it, and it’s a difficult habit to break.

First, you need to find out why your child is screaming. Most of the time, it’s the way he manages his emotions. This is especially true when he doesn’t like something or feels frustrated. In addition, screaming usually also comes with tantrums or crying.

He might also behave like this in order to get something he wants. As parents, you’re the ones in charge. If kids see that screaming will get them what they want, they’ll keep doing it. That is, the next time he wants something similar, he’ll use the same method that works.

Another issue to keep in mind is that children are like sponges that absorb everything they see; they copy and see anything they see around them. If the parents or siblings scream at each other, your child will too.

Tips to change how your child expresses himself

It’s important to make it clear that shouting isn’t a good way to express yourself, no matter how old you are or what you want to get. When it comes to children, it’s essential to explain that yelling makes situations worse.

Of course, when they’re very young, they understand more with gestures and actions than words. Therefore, the first step to stop your child from screaming is not to shout at him.

That way, he’ll understand that screaming isn’t right and there are better ways to express himself. If you yell at him, you’ll set a bad example, and it’ll be confusing for him to learn how to talk to others.

Do your best to stop screaming at home, even among adults and if you think your child can’t hear you. Control your anger. In addition, if you and your partner have a problem, solve it quietly and in private.

You should also know that your child won’t stop screaming overnight if he’s been doing it for months. However, you do have to be blunt about changing his habits. The next time your child shouts, don’t respond by yelling back or give him what he wants.

Rather, tell him you won’t pay attention to him if he keeps screaming. He can yell as much as he wants but it won’t help him. Keep doing another activity and let him calm down. That way, he can calmly explain what he wants or what he’s feeling.

How long can it take to stop your child from screaming?

It’s definitely not an easy change. It will be hard at the beginning because you might feel bad for him or want to do anything to make him quiet. However, if you keep giving into his tantrums, it will be even harder to change later on.

If he behaves like this in public, don’t worry about what other people will think. There will always be someone with bad intentions waiting to judge you.

It’s true that if you’re on a bus, on the train, at the store or on a plane and your child starts screaming, you might not know how to instantly quiet him down. At those times, you’ll be glad you’ve been working on it at home. You’ll definitely know what to do to help calm him down, or at least enough until you’re in private.

Patience is key in these cases when it seems like nothing is working. Take a deep breath, count to one hundred and apologize to those around you.

However, don’t ever just give in to what your child wants when he screams. When he calms down, he’ll learn that he’ll get what he wants when he asks for it nicely.

The Reasons Why Children Throw Tantrums
Many parents are concerned when their children throw tantrums. However, parents can use certain methods to calm them down. Read more »
Link copied!
Interesting Articles
Tips for raising your child
Safety Rules for Going to the Beach with Children