Congenital Varicella: What Is It And What Are Its Dangers? 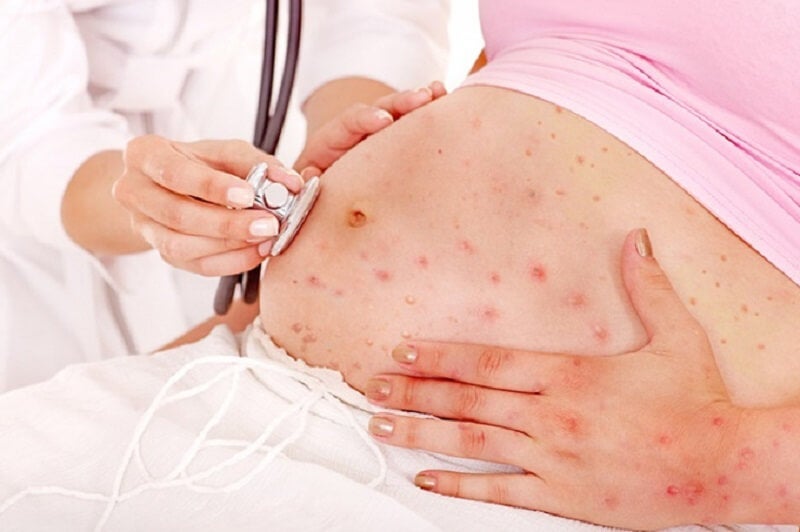 In this article we’ll talk about the health risks and treatment of congenital varicella.

Chickenpox, also known as varicella, is a disease that can occur at any stage of our lives. It is, however, usually associated with childhood.

This is an infectious disease with great endemic capacity, which can seriously affect a pregnant woman.

This infection, caused by the zoster virus, doesn’t occur so frequently in pregnancy. However, it can cause serious problems when it occurs during gestation.

Because of this, if the pregnant woman contracts chickenpox, the baby in her womb could suffer from a version known as congenital varicella.

Congenital varicella can cause serious problems to the fetus. In addition to the characteristic condition of the skin, anomalies in the eyes, damage to the central nervous system and even fetal death may occur.

According to experts’ assessment, at least 10% of women of childbearing age are prone to contracting the chickenpox virus. Furthermore, doctors have found that most women at this stage of their lives don’t have enough antibodies to fight this virus.

How does chickenpox affect the fetus?

When the mother gets chickenpox during pregnancy, it can seriously affect the fetus. Specialists have noted that the more advanced the pregnancy, the more likelihood of damage in the fetus.

Experts believe that if the mother gets chickenpox when she is about to give birth, the baby will be born without the ability to fight the virus.

As we’ve said earlier, if the mother doesn’t have the antibodies to fight the zoster virus, then her newborn baby won’t either.

Similarly, during the first trimester of pregnancy, the virus is equally dangerous. In this stage the baby is being formed, and this can cause different types of damage.

The following problems are related to congenital varicella:

In addition to the precautions before and during pregnancy in relation to chickenpox, experts advise the pregnant woman to carry out regular checkups throughout the pregnancy. It’s easy to identify the problem at any prenatal checkup.

If doctors find that the pregnant woman has the virus, then they should carry out in-depth tests to check on the condition of the fetus.

They use several types of tests to check on the baby’s condition once this disease is diagnosed in the mother. Here are some of the most common:

Recommendations for the pregnant woman

Any woman who is planning a pregnancy should make sure she is vaccinated against chickenpox. If she hasn’t been immunized, then it’s advisable to be vaccinated at least six months before conception.

In the event of this not being possible, due to an unexpected pregnancy for example, it’s advisable to take extreme precautions.

It can be highly dangerous for the pregnant woman to be exposed to the virus. Avoid coming into contact with potential contaminants, for example in hospitals or places with poor ventilation.