The Use of Melatonin in Children to Induce Sleep

The use of melatonin in children to induce sleep is becoming increasingly common. But what is melatonin? How does it work? What are its effects on the body? 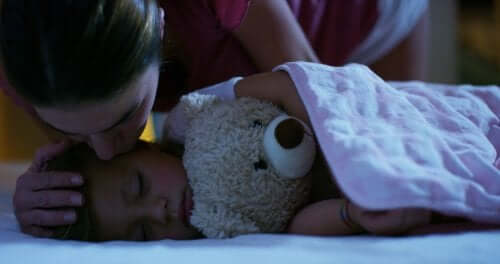 Nowadays, sleep difficulties in children are a very common problem. Therefore, the use of melatonin in children to induce sleep is a very useful tool. However, you must know all about it before trying it out.

Sleep plays a fundamental role in child development, including behavior, learning, and growth. Thus, it’s something you have to monitor.

Many children suffer from sleep disorders at some point. In this regard, one of the most common is difficulty falling asleep. The causes can be varied, but it’s usually due to incorrect behavior or habits.

Melatonin is a hormone that occurs naturally in the body overnight. The pineal gland produces it from the first weeks of life and distributes it throughout the body.

Melatonin regulates the day-night and sleep-wake cycles. Thus, its blood levels are higher during the dark and less when it’s light. This is what’s called circadian rhythm.

Melatonin is hypnotic. In other words, its main function is to facilitate the onset of sleep. When it gets dark and there’s not a lot of light, melatonin acts as a messenger, alerting the body that it’s time to sleep. And the opposite happens at dawn.

Also, it acts in almost all the organs of the body. Likewise, it has other functions:

The use of melatonin as a drug

Apart from the melatonin the body generates, there’s exogenous melatonin that pharmaceutical laboratories synthesize. This is what you can use in children as a medication.

There are two types of pharmaceutical presentations of melatonin:

Medical professionals indicate the use of melatonin mainly in cases of altered sleep-wake cycles. For example:

The use of melatonin in children

Sometimes, medical professionals recommend the use of melatonin in children to facilitate sleep onset. Especially when their sleep-cycles are altered.

Pediatricians sometimes recommend it to children with sleep onset insomnia, which refers to children who have a hard time falling asleep. However, they must always rule out other problems and diseases beforehand, as well as adopt proper sleep hygiene.

You should never use melatonin in children without an indication from a pediatrician or sleep specialist. In fact, the Spanish Pediatric Association warns that there aren’t many clinical trials for its use in children.

Medical professionals don’t recommend the use of melatonin in children under six months. This is mainly because a baby’s sleep-wake cycle isn’t totally established when they’re five or six months old. Therefore, melatonin doesn’t demonstrate the same efficiency.

In addition, it’s necessary to control the treatment dose and duration. The amount of melatonin that medical professionals usually recommended for children is between one and three milligrams a day. In general, the treatment shouldn’t last longer than four weeks.

The patient should always take melatonin at the same time, between 30 and 60 minutes before bedtime. Also, experts state that the time the patient takes it is more important than the dose.

The use of melatonin in children should always be accompanied by sleep hygiene, environmental, and dietary measures. For example, some of these measures are:

Side effects of melatonin in children

The use of melatonin in children can cause some side effects that you need to know and monitor. For example, some of them are:

In conclusion, the use of melatonin in children is a useful tool for inducing sleep. However, you should always use it carefully and accompany it with environmental measures. This is because it’s a synthetic hormone, a drug that isn’t without side effects.

The importance of sleep
Curiosities About Children's Sleep

Sleep is very important for children. Getting kids to rest and get enough sleep is important for physical and mental development. In…

The importance of sleep
Sleep Hygiene for Hyperactive Children

Do you want to know how you can help your hyperactive child to have refreshing, repairing, and good quality sleep?…

The importance of sleep
Sleeping Patterns in One-Year-Old Babies

Since birth, babies usually stick close by their mother. Commonly, they sleep in the same bed as their parents, or…

Sleeping is an action that we perform automatically every day. It's very important in regenerating the mind and body. Sleep…