Symptoms of Gluten Intolerance in Children

The symptoms of gluten intolerance in children may be related to the digestive system, growth, and behavior. 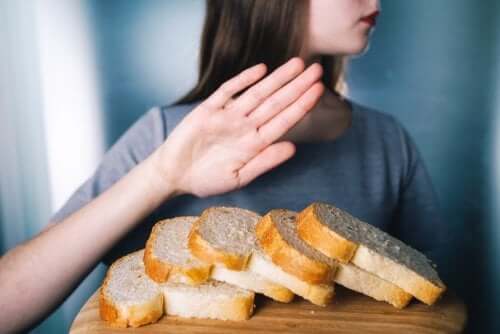 The symptoms of gluten intolerance can be digestive or otherwise. They vary according to age and aren’t the same in all children. It’s important to be familiar with the symptoms in order to make a correct diagnosis as early as possible. Because of this, we’d like to go through the different symptoms which can help you know if your child is gluten intolerant.

Gluten intolerance or celiac disease is an immune reaction to gluten, a protein found in wheat, barley and rye. Over time, this reaction damages the lining of the small intestine and prevents the absorption of some nutrients.

In children, gastrointestinal symptoms usually occur between 6 and 24 months, once gluten is introduced into the diet. The most typical symptoms are nausea, vomiting, diarrhea, low weight, growth problems, among others. We’ll now take a look at these symptoms in more detail.

Perhaps the most significant evidence that can show that a child is gluten intolerant has to do with the digestive system. Here are some of the most common symptoms in this regard:

Other symptoms that may show that children are gluten intolerant is when they don’t grow as quickly as other children of the same age, both in height and weight.

In children under two years of age, progressive muscular atrophy can occur and, if children are diagnosed when they’re over two, they could experience puberty later than other children.

Apart from the physical symptoms, there are also signs in children’s behavior that they may be gluten intolerant. These could be:

Other manifestations of gluten intolerance in children

This is the most common symptom in celiacs. This occurs due to damage to the intestine, which causes it not to absorb nutrients, leading to deficiencies in certain substances.

Iron is the most common deficiency. Calcium, vitamin D and potassium deficiencies also occur, and this causes children to have lower bone mineral density.

Herpetiformis dermatitis is the manifestation of celiac disease on the skin. This is a skin disease that causes itching and blisters, and that originates from intestinal gluten intolerance. The rash usually appears on the elbows, knees, torso, scalp and buttocks.

Usually, herpetiformis dermatitis is linked to changes identical to those of celiac disease in the walls of the small intestine, but this dermatitis doesn’t always produce obvious digestive symptoms.

Cold sores are a quite frequent, but not well-known, symptom of gluten intolerance. Sometimes called canker sores, these are circle-shaped lesions that have a slight swelling and usually occur in the gums, inner cheeks and under the tongue.

Groups at risk of gluten intolerance

Although any child can suffer from this intolerance, there are certain risk groups, such as:

The disease affects caucasian people more than any other group. It’s also more frequent in women than in men, and is hereditary.

Gluten intolerance is 5 times higher in children than in adults. Currently, it isn’t possible to prevent this disease and the only treatment is to remove gluten from the child’s diet.

If your child has some, or several, of these symptoms, then go to the doctor for a diagnosis. If the diagnosis is positive then a nutritionist will give you guidelines about how to keep a gluten-free diet.

Here’s another article that we’re sure you’ll find helpful:

Celiac Disease: Everything You Need to Know
Celiac disease can happen to anyone at any age. It's not a life-threatening condition, but it demands you be extra careful with what you eat. Read more »
Link copied!
Interesting Articles
Illnesses in children
Systemic Lupus Erythematosus in Children

Illness
What Is Kabuki Syndrome?

Kabuki syndrome, also known as Kabuki mask syndrome or Niikawa Kuroki syndrome, is a very rare genetic disease unknown to most people. For this reason, we've prepared this article about…