Lack of Vaccination and Increased Cases of the Measles

More than 21,000,000 lives have been saved since 2000 thanks to a vaccination campaign against the mumps. However, since 2016, the world has seen a 30% increase of measles cases, mostly due to lack of vaccination against the disease. 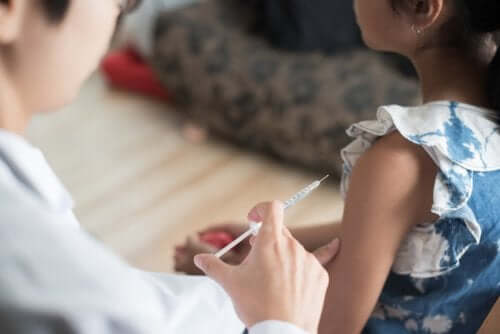 Lack of vaccination is one of the leading causes behind the sudden comeback of the measles worldwide. In the year 2000, the United States was on the verge of declaring the eradication of this illness. At this point, there were less than 12 registered cases per year in the country.

However, due to immigration and the vaccination gap, we’re far from reaching that objective. According to UNICEF, we could be talking about a resurgence of the illness.

What are the measles?

The measles are a very serious and contagious disease that used to cause approximately two million deaths per year. This was before the massive vaccination of the population.

Now, according to the World Health Organization (WHO), the measles killed an estimated 111,000 people. Most of these individuals were children between the ages of 2 and 3.

This illness is caused by a virus from the paramyxovirus family and only affects human beings. It spreads through direct contact and by air. First, it affects the airways and then spreads to the entire body.

The effects of the virus due to lack of vaccination

The measles virus manifests itself mainly through elevated body temperature 10 to 12 days after infection. Later, a skin rash consisting of red-colored pimples appears.

The rash normally begins on the face and neck and then spreads to the rest of the body, reaching even hands and feet. After five days, the symptoms begin to recede and disappear.

However, in other cases, complications can occur during the infectious process, having serious consequences. This includes blindness, encephalitis, pneumonia and, finally, death, if the symptoms aren’t treated in time.

These more serious cases are most common in children under the age of five who have a suppressed immune system and live in areas of malnutrition or where the vaccine isn’t available.

What’s the reason behind the lack of vaccination?

“Complacency about the disease and the spread of falsehoods about the vaccine in Europe, a collapsing health system in Venezuela, and pockets of fragility and low immunization coverage in Africa are combining to bring about a global resurgence of measles after years of progress.”

Countries like Guatemala, Nigeria and Pakistan are already on alert for possible measles outbreak due to the lack of vaccination. This is noteworthy, given the fact that the measles vaccine is very cheap. Pharmaceutical companies and UNICEF have secured on the price.

While the vaccine costs less than one dollar, many children are only getting one of the two necessary doses. This is due to war and the lack of a proper health care system in countries like these.

The rejection of vaccines in developed countries

This data and the fact that in 2012 the World Health Assembly approved the Global Vaccine Action plan to eradicate the measles go against the epidemiological statistics regarding the measles in developed countries.

Lack of vaccination in these countries is worrisome. There has been a great spread of misinformation to the population by anti-vaccine campaigns. These campaigns claim that vaccination is no longer necessary if symptoms are treatable. What’s more, they point out the danger of possible side effects related to the vaccine.

However, the truth is quite the opposite. Health professionals are considering a possible vaccination campaign in women born between the ages of 1971 and 1981. This is because the consequences of contracting the measles during pregnancy can lead to miscarriage and severe congenital birth defects.

The measles vaccine has been around for more than 60 years and is safe and effective. So much so that it’s usually administered along with the vaccines against rubella and the mumps. It’s true that a percentage of the population presents adverse effects, but we’re talking about millions of vaccines per year.

Measure for avoiding the spread of the measles

In 2001, associations like Red Cross International, the CDC, the United Nations, UNICEF and the WHO signed the Measles and Rubella Initiative. The objectives of the initiative are to:

What You Need to Know about the Meningitis B Vaccine, Bexsero
The meningitis B vaccine has become a major topic lately. This is mostly due to the long waiting lists in pharmacies as a result of limited distribution. Read more »
Link copied!
Interesting Articles
Illnesses in babies
Eczema in Babies: Characteristics and Treatment