Neonatal sepsis is a life-threatening and deadly condition. It's crucial to diagnose and treat it as quickly as possible. 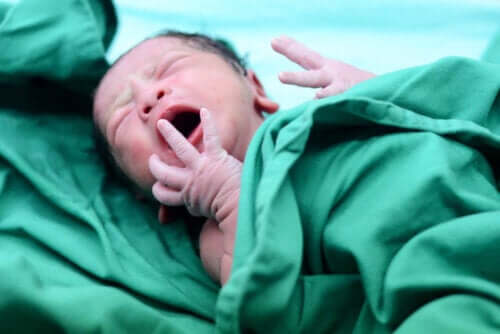 Neonatal sepsis consists of microorganisms invading a newborn’s blood; these microorganisms are usually different types of bacteria. Although this condition can affect anyone, there are two particularly vulnerable population groups: newborn babies and the elderly.

Neonatal sepsis produces very nonspecific and varied symptoms, especially in infants. Additionally, it is difficult to detect because the baby doesn’t understand what’s happening to them. It’s very serious and can quickly lead to organ failure and death. Therefore, be alert to any warning signs that your baby presents. Here’s everything you need to know about neonatal sepsis.

What is neonatal sepsis?

As previously mentioned, sepsis is the infection of a person’s blood by microorganisms. When we talk about neonatal sepsis, we’re referring to this infection in newborns, in particular in newborns younger than three months old.

Babies of this age are a particularly vulnerable group, as their immune system isn’t yet mature, so they can’t defend themselves against infections like a healthy adult.

The way the infection is acquired and the microorganisms involved are different between the two types of neonatal sepsis.

In these cases, the most commonly involved bacteria would be E. coli and group B streptococcus (GBS). The latter has decreased its prevalence, since the mother is monitored throughout pregnancy to prevent her from delivering while infected and passing it to the fetus. There are many more microorganisms that may be involved in early neonatal sepsis.

On the other hand, in late neonatal sepsis, the microorganisms normally present are staphylococci and, as just like early sepsis, E. coli.

These types of infections, unlike early ones, are acquired in the first weeks of life. This usually occurs in premature babies who are born with an extremely low weight or in babies who, for any reason, have to carry routes or catheters for a while.

This may interest you: 5 common childhood infections in the summer

Babies, especially newborns that are only a few days or weeks old, often have very nonspecific symptoms when they have a disease. Neonatal sepsis is no exception. Some of the most common symptoms are:

You may also find this interesting: Cronobacter infection in childhood milk

Treatment and prognosis of neonatal sepsis

Neonatal sepsis is a very serious condition. In a few hours, if the infection isn’t controlled, it can lead to vital organ failure and thus the death of the baby. That is why it’s of utmost importance to know how to identify and diagnose it as soon as possible to treat it.

Treatment is based on antibiotics. It’s necessary to know which germ is responsible for the infection to establish the most appropriate and specific treatment. In some cases, if the infection is severe and progresses rapidly, it’ll be treated with an antibiotic that covers most microorganisms until the results of the culture are present and can be treated with a more suitable one.

The prognosis for sepsis is severe. Because different microorganisms cause it, some cases will be faster and aggressive and others more benign. Therefore, mortality from neonatal sepsis ranges from 3% to 40%.

If the baby overcomes it, it may run out of sequence or some of them may remain. The most common may be, for example, cognitive impairment in a child that affects his or her development or dysfunction of any of the organs that have been affected.

The most important thing will be to recognize any warning signs in the baby and to go immediately to the emergency room. Sepsis is a potentially serious condition that can progress very quickly and have serious consequences for the baby.