The Special Diet for Children with Crohn's Disease

When it comes to children with Crohn's disease, it's important that children follow a specific diet. This diet will depend on what phase children find themselves in, in order to prevent health problems. 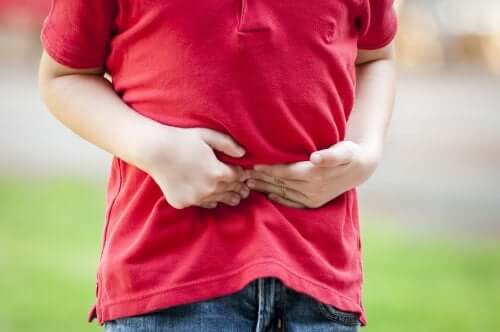 Adults and children with Crohn’s disease must follow a specific diet. Doing so will help to relieve painful and bothersome symptoms and avoid episodes.

Therefore, if your child suffers from this illness, take a few minutes to read the following article. We’ll teach you what you need to know about your little one’s unique nutritional needs.

What kind of special diet should children with Crohn’s disease follow?

What is Crohn’s disease?

Crohn’s disease is a type of chronic inflammatory intestinal disease. While its exact origin remains a mystery, it’s attributed to several factors. It’s more common in young adults, but it can also affect children.

What are the symptoms of Crohn’s disease?

Crohn’s disease is characterized by an inflammation of the mucous membranes of a specific area of the intestine. It can cause lesions in the area and its appearance is unpredictable. It presents itself with alternating episodes of longer or shorter durations, during which the illness’s activity stabilizes.

Crohn’s disease can produce symptoms and complications that affect a patient’s quality of life, especially during flareups. The main symptoms that can appear in cases of children with Crohn’s are intestinal and include the following:

The right diet for children with Crohn’s disease

Epidemiological studies have shown that certain foods have protective properties. At the same time, the consumption of certain other foods increases cases of this illness.

For example, studies have shown that a mother’s breast milk is a protective factor when it comes to the appearance of Crohn’s disease. For more detailed information, you can read this article from Alimentary pharmacology & therapeutics.

The reason may have to do with the benefits that breast milk offers when it comes to immunoglobulins and antibodies. Mothers produce these substances and pass them onto their babies.

Maternal breast milk also contains oligosaccharides, which favor the growth of bacteria that are beneficial for the intestines.

The dietary guidelines for children with Crohn’s disease vary. What a patient should and shouldn’t eat depends on whether they’re in an asymptomatic period or experiencing a flareup.

Dietary guidelines during remission, or the asymptomatic period

Foods you should include in your child’s diet

When children are experiencing flareups, it’s important to modify their diet depending on their level of discomfort. Normally, the diet during these moments should be calorie-packed, low in fat, and high in protein. They should also be high in fiber, anti-inflammatory, hydrating, and easy to digest.

Below are more detailed recommendations:

Children with Crohn’s disease may fall underweight or experience delays in their growth. It’s also common for them to have deficiencies when it comes to certain nutrients. As a result, they may suffer problems like anemia and low bone mineral density.

Therefore, if your child’s weight is below normal, keep the following recommendations in mind:

Crohn’s disease is a complicated illness, as it varies in every child as well as the phase he or she is in. Therefore, consulting a professional is always important.

Celiac Disease: Everything You Need to Know
Celiac disease can happen to anyone at any age. It's not a life-threatening condition, but it demands you be extra careful with what you eat. Read more »
Link copied!
Interesting Articles
Illnesses in children
Systemic Lupus Erythematosus in Children