Functional foods for children mainly consist of probiotics and prebiotics, which help to improve children's health. Learn all about them here! 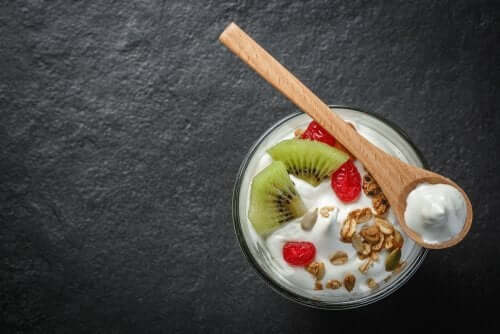 Functional foods, regardless of their nutritional value, have a beneficial effect on health, either improving or reducing the risk of disease. Below, discover what functional foods for children are, as well as their effects.

A functional food can be:

There’s also the combination of pro and prebiotics, such as synbiotics. They stimulate the selective growth of a limited number of bacteria in the colon.

This group includes living microorganisms (bacteria and yeast) that have a positive effect on health. They’re used in foods such as yogurt, other fermented milk derivatives, or even fermented meat products.

The most widely used microorganisms are lactic acid bacteria (Lactobacillus, Streptococcus, and Bifidobacterium). They have a beneficial action due to the fact that they:

Nowadays, there’s a great interest in showing a relationship between probiotics and the following:

This food is an excellent way to increase calcium and other nutrients’ intake, especially in infants and children who don’t get enough milk or formula.

Yogurt is a type of fermented milk, acidified and coagulated by L. bulgaricus and Streptococcus thermophilus. Adding Lactobacillus casei or other lactobacilli to yogurt seems to increase the proportion of fecal lactobacillus, which is why it could have beneficial effects.

On the market, there are different types of infant formulas that can be classified according to if they just contain prebiotics, prebiotics plus probiotics, or just probiotics.

The declaration of the European Society for Pediatric Gastroenterology Hepatology and Nutrition (ESPGHAN) approves adding probiotics to follow-up or follow-on formulas but not to first formulas because they’re different species of the baby’s own intestinal flora.

Thus, due to the state of the newborn’s immune system, there can only be follow-up or follow-on formulas with probiotics.

Another group of functional foods for children are prebiotics. Prebiotics are non-digestible substances that can benefit humans due to the selective stimulation of growth or activity of a group of intestinal bacteria.

At an industrial level, inulin and fructooligosaccharides (FOS) come from chicory, but are also present in wheat, onions, bananas, garlic, and leeks.

Fructooligosaccharides play a role in the development of intestinal bacterial flora. Their fermentation in the colon produces short-chain fatty acids, such as acetic, propionic, and butyric acid:

Breast milk is rich in complex galactooligosaccharides (GOS), which act as natural prebiotics, promoting the development of bifidobacteria. Therefore, there are infant formulas with prebiotics to mimic the composition of breast milk.

Formulas with FOS and GOS favor the growth of the baby’s own bifidobacteria and lactobacilli, both on top of the colon and at the bottom of it. Due to the fact that flora develops differently in every child, they may be included in both start, follow-up or follow-on, or growth formulas.

How Do Probiotics Help Children and Pregnant Women?
Read more »
https://youaremom.com/health/probiotics-help-children-pregnant-women/
Link copied!
Interesting Articles
Eating habits for children
What to Bring Along to Eat on a Family Picnic

Teaching children to eat healthily is key to the prevention of many diseases. One of the aspects we need to…

Cognitive performance is related to the correct development of the brain during pregnancy. This is where nutrition plays a key…

Eating habits for children
Why Is It Good for Children to Learn How to Cook?

The interest in cooking has grown considerably in the last 6 or 7 years. Several TV programs have appeared where…

Now that summer is in full swing, it’s time for children’s favorite time of year: summer vacation. However, it’s never…