How to Detect and Treat Glaucoma in Children

If untreated, this condition can lead to total blindness due to the damage it causes to the optic nerve by increasing intraocular pressure. Find out how to detect and treat glaucoma in children in today's article. 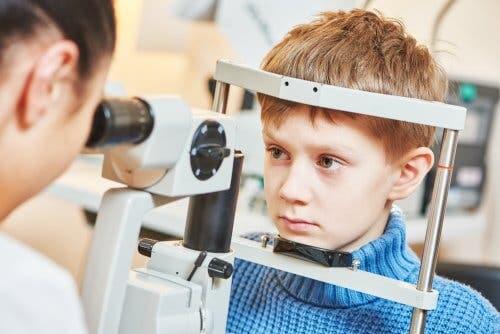 Glaucoma is an illness that takes place in the eyes and can produce total loss of vision. In the article below, we’ll talk about how to detect and treat glaucoma in children. We’ll also look at why it occurs and possible consequences.

As we’ve said, glaucoma is a condition that affects the eyes. It’s mainly characterized by an increase in intraocular pressure as a result of a lack of drainage of the aqueous humor fluid.

To understand it, it’s important to understand a bit about the structure of this organ. First of all, the protective white covering around the eye is the sclera. And, at the same time, there is another layer of protection around the sclera known as the conjunctiva.

In the front part of the eye, we have the cornea, which is the transparent area that allows light to come in. In this area, we also find the iris, which expands and contracts so the pupil can let in a greater or lesser amount of light.

The light that enters is directed toward the crystalline, which is a sort of lense. The crystalline then projects light on the internal coating of the eye, called the retina. There, nerve fibers are responsible for carrying the information they get from the optic nerve to the brain.

Within the ocular structure, we find the following liquids:

Today we’re going to focus specifically on the humor aqueous since it’s what causes glaucoma. The balance between the production and elimination of humor aqueous is what maintains the correct intraocular pressure. In this sense, two pathological situations can occur:

Why does glaucoma occur?

In short, glaucoma is the result of an increase in intraocular pressure. In general, what causes this pressure is a deficit in the drainage of aqueous humor. This deficit leads to an accumulation of this liquid, thus increasing pressure and damaging the optic nerve.

There are two main types of glaucoma:

Glaucoma in children can produce certain symptoms, such as:

How to prevent glaucoma in children?

If untreated, glaucoma in children can lead to total blindness. This is because of the damage that it produces to the optic nerve by increasing intraocular pressure.

It’s possible to avoid this damage through surgery, creating a new liquid drainage system in the eye. Other more conservative treatments control ocular pressure through the administration of pharmaceuticals in the form of eye drops.

In short, if you notice a loss of vision in your child, whether sudden or progressive, total or partial, you should consult a doctor. An ophthalmologist will be able to determine quickly if glaucoma is to blame or not, as well as prescribe any necessary treatment.

Illnesses in children
What Are Dermoid Cysts in Children

Dermoid cysts are lumps that normally develop on the face or head. They can be present at birth or appear…

Illnesses in children
Know How to Act During Epileptic Seizures

In many parts of the world, throughout history, epilepsy has been an illness that finds itself a target of prejudice…