Have you heard of cow's milk protein allergy in children? We'll tell you how to differentiate it from lactose intolerance, as the two are often confused. 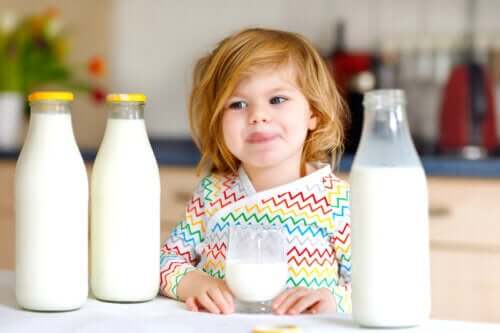 Did you know that the most common allergy in children is cow’s milk protein allergy? Moreover, it’s one of the first allergies to appear, as cow’s milk is usually introduced before the age of one and before other potentially allergenic foods. This allows doctors to detect this allergy early on and start treatment as soon as possible, in order to avoid future problems.

It usually affects 2% of children and tends to persist into adulthood. The most important thing here is to differentiate it from lactose intolerance. Why? Because there are far more food types that you must avoid. For this reason, it’s important for you to stay attentive to the situation, and especially if your child eats at school.

Would you like to know how to detect it, and how to act when an unexpected reaction occurs? Stay tuned and we’ll tell you all about it. We’ll also tell you what they can eat and how to prepare their food in order to avoid a cross reaction.

Note that this is an immune system response, and so experts detect it using IgE antibodies in the blood. That said, there are 2 ways to assess them: the skin prick test and the blood test.

On the one hand, the skin prick test consists of injecting the allergen underneath the skin and observing the appearance of red hives and itchiness over time. In the case of children, this method is the least invasive, and so, because of that, it’s s the most used.

On the other hand, the blood test allows us to evaluate the reaction of the blood cells to milk proteins.

You’ll also need to take into account the medical history that includes family history, age of onset, and time elapsed between the intake of the allergen and the symptoms.

Generally, you can observe the allergy by the appearance of itching and redness of the skin. In addition, after a few hours, you may also get nausea, vomiting, diarrhea, abdominal pain, and respiratory pain.

Unlike lactose intolerance, dairy isn’t solely responsible for cow’s milk protein allergy. Veal and its derivatives, such as hamburgers, sausages, and cannelloni all contain it, among other products.

In addition, there’s great similarity between milk proteins and goat and sheep meat. Because of that, you should avoid these, as well as any other source of lactoglobulins and casein.

You can also find them in sauces, preserves, ready meals, chocolate, cocoa, cereals, some breads, sausages, and candies. This is because they’re used as additives, and you can even find them in soaps, body creams, and medicines. That’s why, before buying, you simply must read the label or ask the seller for advice, as it’s mandatory to declare it.

However, if the product only contains traces, then it’s exempt. The quantities are too small to cause any damage. Most of the time their presence is due to cross-contamination due to them being prepared on the same production lines. So, if you’re not sure whether a product is free of cow’s milk protein, then you better not buy it.

Finally, remember to use different utensils when handling food that’s free of this allergen and other food. It’s best to prepare them in separate areas to avoid contact and cross contamination. Remember to clean all surfaces and pots well after use.

As for dairy products, you can get hold of extensively hydrolyzed formulas that have removed the proteins causing the allergy. If not, then you can try the following alternatives, although you must bear in mind the following recommendations:

As for meat, you can serve your child chicken, rabbit, turkey and pork, which are more tender. Also, if you give them some citrus or peppers in the same meal, you’ll improve their absorption of iron.

It’s normal that many questions will arise on your finding out that your child has an allergy to cow’s milk protein. We’ve already answered a number of them. The problem here is that many basic staple foods are those that are affected – foods that have an important role to play in bone growth and the prevention of anemia.

However, there are other foods available with the same benefits, such as broccoli, Brussels sprouts, almonds, beans, mollusks, fish, and other meat.

In addition to this, when you’re first getting to grips with the allergy, you’ll have to be very careful when buying food or eating out. You’ll need to read up on the subject well in order to prevent accidental ingestion or contact.

Therefore, you’ll always need to carry adrenaline with you, which reduces the impact of anaphylactic shock. This manifests itself through difficulty breathing, dizziness, sweating and tachycardia, among other symptoms.

How to Detect Lactose Intolerance in Babies
Being attentive to symptoms is the best way to detect lactose intolerance in babies. In this article we will share with you the symptoms that characterize this condition. Read more »
Link copied!
Interesting Articles
Illnesses in children
Marfan Syndrome in Children: What You Should Know