Did you know that non-celiac gluten sensitivity affects seven people for every one person with celiac disease? Learn everything you need to know about this pathology. 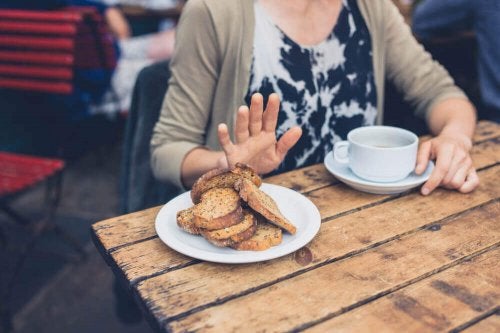 People with non-celiac gluten sensitivity (people who suffer a reaction to gluten without being celiacs) suffer an immune system reaction to gluten intake. This differs from celiac disease in that there is little or no damage to the intestinal villi. However, both produce digestive and extra-digestive symptoms and affect mostly women.

In addition, it’s a pathology that’s diagnosed by exclusion, as the markers in the blood are negative and the genes involved are unknown. What you usually need to do first is to remove all cereals with gluten for a period of 4 to 6 weeks.

After this time, doctors will reintroduce it in order to assess whether there has been a worsening of symptoms. They’ll carry out this protocol after comprehensive testing to rule out celiac disease and wheat allergy.

And if gluten weren’t the only cause…

Research suggests that amylase tripsynsine enzyme inhibitors and fructans are also likely to be involved. These are found in wheat and some vegetables.

Therefore, they make digestion difficult by causing the intestinal barrier to weaken and to be fermented by microbes, giving rise to various symptoms, as we’ll see below.

What symptoms does non-celiac gluten sensitivity have?

Although it only occurs when a person ingests gluten, the inflammation is widespread. This is because all kinds of substances are secreted that stimulate the release of histamine from the tissues.

In both celiac disease and gluten sensitivity, the only effective treatment is a lifelong gluten-free diet. This means avoiding all cereals such as wheat, rye, barley, kamut, bulgur and triticale.

You should even avoid oats. This is despite the fact that they don’t contain gluten, but do contain avenins. These are similar in structure, but only 3% of gluten-sensitive people react negatively to them.

Furthermore, if the fields where the oats are harvested are close to wheat fields, or if the factory itself uses gluten, then contamination can occur.

Note that gluten is a protein that manufacturers use widely as an additive whose function is to thicken and give elasticity and sponginess. Therefore, sauces, chocolate, sausages, hamburgers or jam may all contain it. Although some people think they can still tolerate a certain amount, it’s still too early to say, due to a lack of research on the subject.

It’s also advisable to avoid the consumption of:

In conclusion, non-celiac gluten sensitivity has increased in recent years. You’ll need to see a gastroenterologist in cases of long-term discomfort (at least 2-3 months), in order to rule out celiac disease and allergies. This way, you can start to remove the foods that cause it from your diet and feel much better as a result.

Can Gluten Intolerance Be Hereditary?
Gluten intolerance is just one out of several gluten disorders. They share the same symptoms and the same treatment, but are all these disorders hereditary? Read more »
Link copied!
Interesting Articles
Illnesses in children
Allergies to Bites and Stings in Infants and Children