Ovarian cancer accounts for approximately 5% of female tumors. Every year, about 250,000 new cases are diagnosed in the world. Only 2% are hereditary. 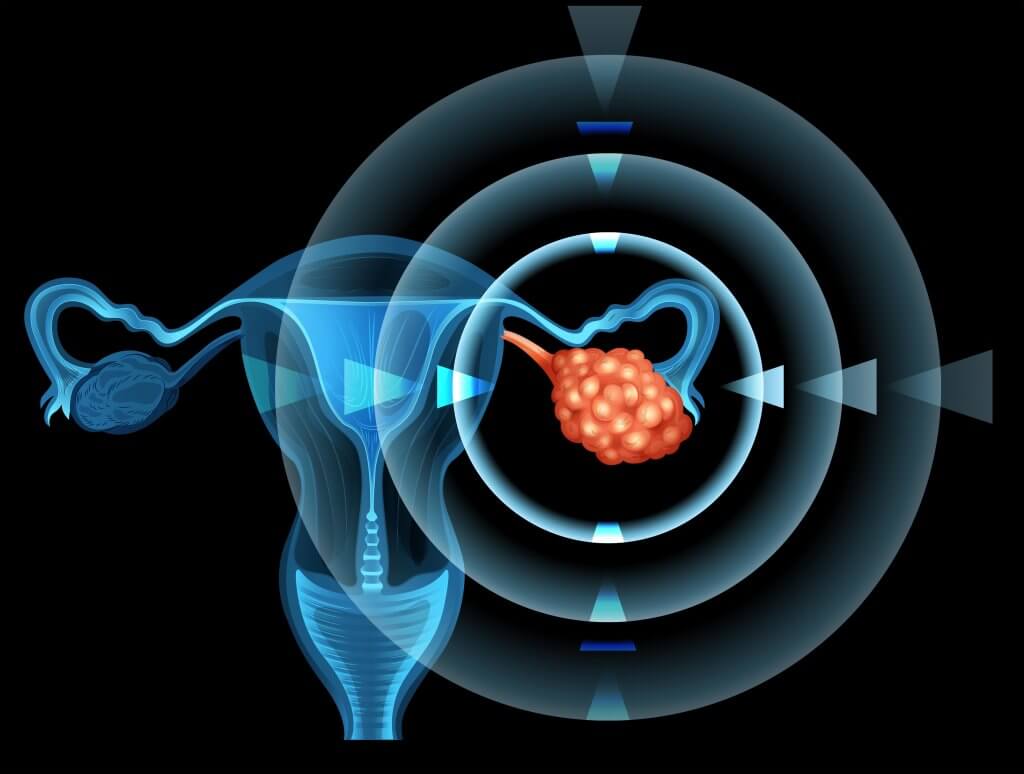 Genetic inheritance is just one of the risk factors of ovarian cancer. The mutation in the genetic material of cells causes a massive increase in their number, which leads to a tumor.

These DNA alterations can be spontaneous, meaning they’re unassociated with genetic inheritance. However, if they occur in the very early stages of embryonic development, it’s very likely that you’ll pass them down to your children. Thus, is ovarian cancer hereditary?

As we mentioned above, cancer results from the uncontrolled proliferation of a group of cells. In the case of ovarian cancer, said abnormal growth originates in the ovaries.

The ovaries are two structures located on both sides of the uterus where eggs are formed (female gametes). They belong to the female reproductive system, along with the fallopian tubes, uterus, and vagina.

To classify the cancer in its various types, you must know what kind of ovarian cell caused the tumor:

Unfortunately, ovarian cancer is asymptomatic in its early stages. This means that it’s usually detected when the disease has spread to other parts of the female reproductive system. The most common signs of this disease are:

Generally, the carcinogenic process begins in an ovarian cell with DNA alterations. If a medical professional doesn’t detect the disease in time, the tumor cells spread to other areas (uterine cancer) or reach other organs through the bloodstream, causing metastasis.

Experts don’t yet properly understand the causes that are directly related to the manifestation of tumors in the ovaries. However, there’s been an increase in the frequency of occurrence in women between 50 and 60 or who underwent long-term hormone therapy for menopause.

Excess weight and fertility treatments (IVF) also seem to be involved in the development of ovarian cancer. Although the medical community hasn’t yet established a direct relationship, they’ve observed a less worrying manifestation of these tumors in these groups of women.

Finally, there’s a close relationship between some types of breast and ovarian cancer and genetic inheritance. A family history in these cases and the identification of the genes involved make it known as family cancer syndromes.

The types of hereditary ovarian cancer that exist

Many people have probably heard the phrase: “That person suffered from cancer, just like her mother.” It’s a fact that some types of cancer with a strong genetic component seem to “repeat” in families. Some women, including famous ones like Angelina Jolie, opt for mastectomies to avoid suffering the same cancer their mothers suffered from.

In some cases, when the cancer is caused by an altered gene, there’s a high probability that it’ll be transmitted to offspring. However, said transmission doesn’t mean that the cancer will develop. If one parent’s germinal cells have an abnormal gene, they’ll undoubtedly pass it down to their children.

In the case of ovarian cancer, there are some clear examples of this family inheritance linked to cancer, such as hereditary breast – ovarian cancer syndromes (HBOC). Also, ovarian cancer associated with BRCA1 or BRCA2 genes, is more typical of breast cancer, but present in women susceptible to suffering from both.

Less significant among women are PTEN hamartoma tumor syndrome, associated with the PTEN gene, linked to germinal cell mutation and known as Peutz–Jeghers syndrome. In turn, this syndrome, linked to the gene STK11, is related to stomach alterations that, in some women, can result in epithelial ovarian cancer.

Although not all cases of ovarian cancer have a hereditary component, they do have a genetic risk factor, among others such as drinking, smoking, or obesity.

Moreover, there may be cases where there is a well-known genetic inheritance, because a direct relative suffered from the disease, but the carrier of the mutated gene doesn’t develop it.

Genetic Syndromes: What Are They and How Are They Inherited?
What are genetic syndromes? What is the role in disabilities? Read on and we'll tell you all you need to know in this fascinating article. Read more »
Link copied!
Interesting Articles
Illnesses in babies
The Relationship Between Food and Eczema in Babies