What to Do If Your Child Has Taken Medicine by Mistake

Unfortunately, when children take medication by mistake, many things may occur. If you find yourself in this situation, it's important to stay calm and seek medical attention right away. 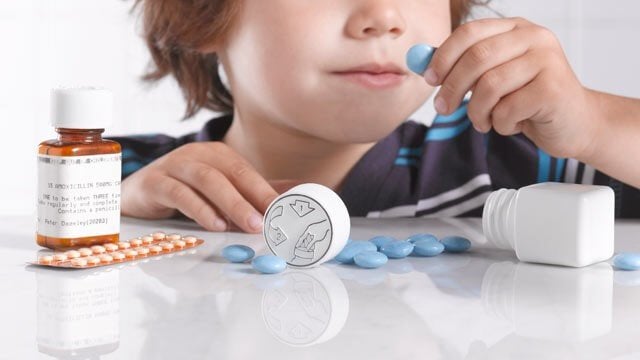 The tiny size of pills makes them a great risk and, in some cases, just one can be fatal. If your child has taken medicine by mistake, seek medical attention right away, since it might be too late by the time symptoms appear.

Poisoning as the result of unprescribed medication is, unfortunately, very common. In fact, it’s the number one cause of poisoning in little ones.

What should I do if my child has taken medicine by mistake?

When parents fail to take adequate safety measures when it comes to storing medication, children’s curiosity can get the best of them. If your child has taken medicine by mistake, you should stay calm.

However, you must still act as quickly as possible to reduce the risks of harm. Above all, never induce vomiting. This won’t help your child, and may even do more damage.

Keep in mind that there are 3 classifications when it comes to medication:

These include antibiotics, ointments, laxatives, mucolytics, cough suppressants and antacids. If your child ingests a medication with low toxicity, then you don’t need to be alarmed. Just the same, if you’re not sure how much he or she swallowed, you should see a doctor.

In this group we find antidepressants, acetaminophen, blood-thinning drugs, sedatives and diuretics. If your child swallows a medication that has medium toxicity, then you should go to the hospital right away. In most cases, doctors will want to keep your child under observation for several hours.

Here we’re referring to bronchodilators, antiarrhythmics, and antidiabetic drugs. In the case that your child ingests a highly toxic pharmaceutical, you should seek immediate medical attention at the emergency room. The excessive consumption of these medications can affect vital organs.

What symptoms may appear?

The answer to this question, of course, depends completely on the medication ingested, and the amount. Sometimes, the absence of symptoms may put mothers at ease. However, this is a mistake. Some medications have latent symptoms. By the time they appear, it may be too late.

There are some general symptoms you may observe if your child has taken medicine by mistake. These include vomiting, nausea, discomfort, loss of consciousness, difficulty breathing, increased or decreased heart rate, dilated pupils, and pale skin.

Abdominal cramping and low body temperature are also on the list of general symptoms.

“If your child takes medication by mistake, don’t trust his or her condition to judge the situation. Seek medical attention right away, since it might be too late by the time symptoms appear.”

What are the most dangerous medications?

If your child has taken medicine by mistake, you should keep in mind that the following are the most dangerous:

How to keep my child from taking medicine by mistake?

Of course, the best way to deal with an overdose is preventing it in the first place. Follow the advice below to use and store medication in a safe way:

In conclusion, you should always keep medicine out of reach. This is a fundamental rule of thumb. As you can see, when children take medicine by mistake, the consequences can be devastating.