What to Do to Prevent Mosquito Bites

Mosquito bites are very annoying and usually occur at night while we sleep. Luckily, there are some good habits, as well as natural remedies, that can help ward off mosquitoes and prevent mosquito bites. 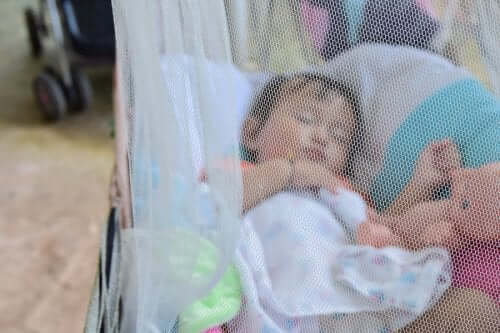 Mosquitoes are rather tedious pests because their bites aren’t just annoying, but can also cause allergic reactions or spread diseases. Luckily, it’s possible to take precautions to help prevent mosquito bites with natural tricks that will keep them away.

Mosquitoes are attracted to the carbon dioxide that human bodies release when they breathe, as well as their heat and moisture. These insects are guided by their excellent sense of smell to select who they’ll sink their “teeth” into, which are nothing more than very thin mouthparts.

Given this information, we should know what smells they prefer and which ones they feel repulsed by. Below, we’ll share some recommendations to help prevent mosquito bites.

The chemical components of the human body work as a radar for these insects. They mainly sniff ammonia, lactic acid, and carboxylic acids. In fact, the mosquito species Aedes aegypti, considered a carrier of viruses such as yellow fever or dengue fever, can’t resist lactic acid.

Meanwhile, species such as Anopheles gambiae, the malaria mosquito, is attracted more to those who accumulate sweat for several days. That’s why those who don’t have access to proper hygiene will be more likely to be bitten by mosquitoes.

Another population susceptible to mosquito bites are pregnant women, especially in the last stage of pregnancy, since they exhale more carbon dioxide. Future mothers are especially vulnerable to these bites and should be cautious.

While some people have a genetic shield to repel mosquitoes, the truth is that most people must fight these annoying insects. In the summer, sweat on the skin attracts mosquitoes. However, there are smells and plants that repel them.

Some plant species such as sage, which is antimicrobial, is effective as a natural repellent against mosquito bites. Others are thyme, cinnamon, eucalyptus, or cumin. Eucalyptus oil is particularly recommended for long outdoor walks.

“Another type of population susceptible to mosquito bites are pregnant women, especially in the last stage of pregnancy, since they exhale more carbon dioxide.”

Home and hygiene tips to keep mosquitoes away

In conclusion, it’s a good idea to always be prepared to prevent mosquito bites, either at home or outdoors. In this regard, it’s best not to resort to insecticides and bet on homemade solutions that won’t end up contaminating your entire home.

Mosquito Bites in Children: What to Do
In today's article, we'll look at some good habits that you can put in place to bothersome mosquito bites in children, as well as some home remedies. Read more »
Link copied!
Interesting Articles
Childhood psychology
Hoarding Disorder in Children