5 Keys to Prevent Smoking Among Teens

Tobacco addiction in teens has become a public health issue despite attempts by government and non-government health organizations alike to prevent this habit. Today we'll offer some advice for early prevention of smoking among teens. 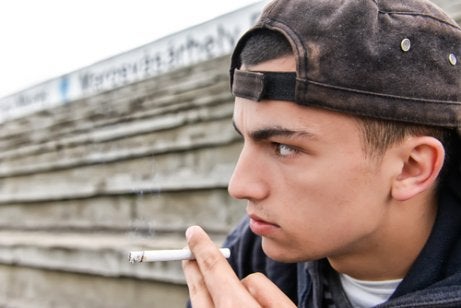 Campaigns that promote awareness about the negative effects of smoking have done little to convince people to quit. There are still a great number of young people around the world that maintain their cigarette habit.

The World Health Organization estimates that 150 million adolescents are smokers.

However, these campaigns continue and spread through public media. They invite teens to learn more about the consequences of cigarette addiction and the harmful effects of smoking on one’s health.

What are the main causes of tobacco addiction among young people?

There are several factors that drive young people to step into the world of cigarette consumption. Identifying these factors is an important part of early intervention and prevention of smoking among teens.

This is perhaps that most important factor. Many teens who don’t pick up the habit of smoking tend to feel that their possibilities of fitting in are lower. In the same way, many teens are curious and have a desire to experiment and try new things. They believe that smoking is cool and will make them more popular.

The stages of puberty and adolescence have always been characterized by rebellion, disobedience and, in some cases, provocation.

Young people believe that smoking a cigarette is one of the easiest and most effective ways to break the rules. It’s a way to rebel against parents, society, teachers, etc.

An excuse to relieve stress

Young people often hold the false belief that cigarettes will help them relieve stress and control anxiety. This drives some teens to try smoking.

During exam time, for example, teens find themselves under a great deal of pressure and emotions are at a high level. Smoking provides an instant but temporary sense of relaxation.

However, once the effect of the drug wears off, things go back to just the way they were – or sometimes even worse. This sensation produces the need to smoke more and more.

Statistics demonstrate that when parents are smokers, there is a higher risk of their children becoming smokers when they are older. In this case, the addiction to nicotine is higher than in the case of children whose parents don’t smoke.

It’s important to point out that in this case, the parents have no one else to blame but themselves. With their own negative example, they expose their children to acquiring the same addiction.

Currently, it’s illegal to produce commercials or ad campaigns that encourage teens to smoke. However, the simple fact that someone lights a cigarette during a scene in a TV show or movie is powerfully influential. The same is true for the press. Smoking in the media indirectly incites teens to act in imitation.

Studies have also proven that there is a strong relationship between advertisements and the initiation into alcohol. Young people are especially susceptible.

There still exist some false beliefs regarding supposed benefits of smoking tobacco. As a result, the true, negative consequences remain hidden below the false positive images that prevail.

“The true face of smoking is disease, death and horror – not the glamor and sophistication that pushers in the tobacco industry try to portray”
–David Byrne–

5 keys to prevent smoking among teens