The Characteristics of School Bullies

It's important to identify potential bullies in order to help prevent bullying situations. In today's article we'll explain the most common characteristics to look out for. 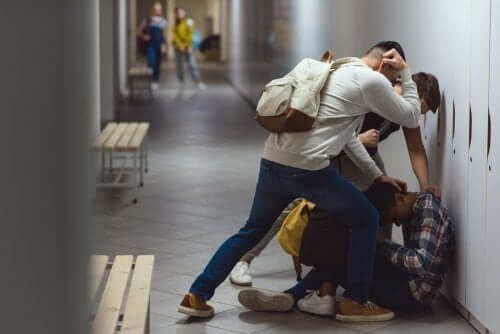 Students who participate in aggressive and violent behaviors against others tend to possess a specific physical and psychological profile. Below, we’ll go into detail about the most common characteristics of school bullies.

It’s important for teachers and professors to be aware of these characteristics. Educators have a responsibility when it comes to identifying possible aggressors by observing and recording student behavior. This way, they can anticipate, prevent, and reduce cases of bullying in their schools.

The most common characteristics of school bullies

The objective of school bullies is to constantly submit their victims. They take advantage of a variety of situations, including physical, social, or psychological advantages over those they bully.

Bullies may practice intimidation behaviors individually or in groups. These acts of bullying can take on a number of forms… From physical violence to more subtle behaviors, which are emotional, verbal, and psychological.

But what type of students commit these acts of aggression? In general, school bullies have the following characteristics in common:

The different types of bullies

Despite these being the most common characteristics of school bullies, we need to take into account that there is more than one type of bully. According to Alexander Schwarz, there are three different types, which are the following:

The consequences of assuming the role of aggressor

Assuming the role of aggressor has serious negative effects on bullies, which are both short and long term. As a result of their violent conduct, school bullies tend to:

As these children approach adulthood, they fall into social maladjusted behaviors. These may include vandalism, alcohol abuse, and the abuse of other substances. At the same time, they’re likely to mistreat others in the future (their partner, their children, etc.) or become aggressive delinquents.

Therefore, it’s important to detect and prevent bullying. To do this, schools must carry out activities that promote and develop among students abilities such as empathy, sensitivity, and respect in regards to diversity and the needs, characteristics, and interests of others.

The objective of these activities and the promotion of these qualities is for school bullies and those who act as witnesses to become aware of the problem of bullying. What’s more, schools should strive to repudiate and condemn these aggressive actions.
Teaching Your Child to Respect Diversity
It's important to teach our children to respect diversity, which means accepting that our world is full of different ethnicities, religions and beliefs. Read more »
Link copied!
Interesting Articles
Childhood psychology
All About the Theory of Multiple Intelligences

Childhood psychology
Schedules of Reinforcement: What They Are and How to Use Them

Behaviorism is a psychological theory that offers a variety of techniques to modify behavior. Many of them are used in…