Childhood schizophrenia is a serious disorder. Although it's not very common, it must be detected early to prevent further consequences. 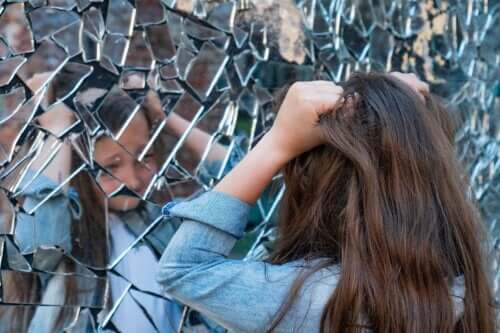 Serious mental disorders exist in adults, but in children, their effects can be worse when they occur at an early age. One such disorder is childhood schizophrenia. It’s similar that of adults but has a greater effect on children’s development and behavior.

Childhood schizophrenia can be difficult to diagnose and treat and also affects a child’s emotional and social development.

Those who suffer from this mental illness require life-long treatment. Therefore, early detection is crucial to better outcomes with children in the long term.

What is childhood schizophrenia?

Childhood schizophrenia is a very rare disorder in children, but it’s serious because children interpret reality in a distorted way. The illness affects the individual’s thoughts (cognitive level), behavior and emotions.

It can cause hallucinations, delusions, thought and behavior disorders, or a combination of these, and prevents the child from leading a normal life. Therefore, it’s important to detect it early and start treatment as soon as possible.

It’s not common for children to receive a diagnosis of schizophrenia before the age of 13 (this occurs in very rare cases). Schizophrenia is a disorder that usually begins between the ages of 25-30, although early-onset schizophrenia can occur.

This disorder has different symptoms, and symptoms may vary over time in both type and severity. There may even be periods in which symptoms become worse, or even disappear.

Some of the symptoms often involve problems in the development of children, such as:

These symptoms are not unique to this disorder. In fact, some of them are also characteristic of children on the autism spectrum or with developmental delays. For this reason, the first thing to do is to make a diagnosis in order to rule out other issues.

The symptoms among adolescents are very similar to those of adults. However, it’s more difficult to make a diagnosis at this age, as some of them are typical of this particular stage of development.

As children get older, other symptoms may appear that are easier to diagnose. This is because, when symptoms begin at an early age, it’s possible to mistake them for a growth phase. Some of these later symptoms are:

Experts aren’t exactly sure what causes the early onset of schizophrenia in children. However, they assume that it occurs the same way that it does in adults. Researchers suggest that it may be due to a combination of genetics, neurotransmission problems in the brain, and the environment.

Neuroimaging studies suggest differences in brain and nervous system structure between people with schizophrenia and those without. It’s not clear why some start early and others don’t.

Although there are no specific causes for this disorder, there are certain factors that can trigger childhood schizophrenia, such as:

Once the diagnosis has been received, this disorder requires treatment throughout life, even if there are periods of disappearance of symptoms. Treatments for childhood schizophrenia include:

The medications chosen for children are usually the same as those given to adults. Children are often prescribed second-generation antipsychotics, as they have fewer side effects than first-generation ones.

In this sense, untreated childhood schizophrenia can lead to other serious emotional, behavioral, or health problems. Therefore, early detection and treatment is important. Some complications that can occur if left untreated include:

As we’ve seen, childhood schizophrenia isn’t a disorder that occurs very often in children, but it can occur. For this reason, it’s important to detect and treat it early to control this disorder before the most serious complications arise.

Early medical treatment is crucial to regulate and reduce psychotic episodes, which can be very difficult for both parents and children to manage. These treatments require consistency so that symptoms improve and children can enjoy long-term quality of life.

Generalized Anxiety Disorder in Children
Generalized anxiety disorder leads children to experience excessive and wide-ranging worry about several different issues. Read more »
Link copied!
Interesting Articles
Childhood psychology
Dermatophagia in Children: What Is It and How to Treat It?