It might be easy to recognize that there's something wrong with an aggressive child. However, the problem isn't obvious from the outside. Here you'll find out what internalizing and externalizing symptoms are. 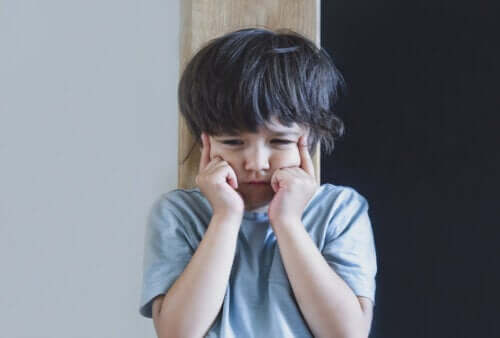 Due to this variety of manifestations, it’s not always easy to detect that children are suffering and that they need professional help. This is why it’s also important to understand the difference between internalizing and externalizing symptoms.

However, the presence of these symptoms doesn’t always mean that the child suffers from a condition or disorder. Nevertheless, it’s important to take them into account. If they don’t receive proper attention, these symptoms may develop into something more serious. So, a proper orientation from childhood may prevent a bigger suffering.

When children think, feel and act in an unusual way, they tend to suffer. In the case of internalizing symptoms, this suffering is focused internally and it leads to:

On the other hand, in the case of externalizing symptoms, suffering is externally focused. And it leads to:

As seen before, it’s easier to detect externalizing symptoms. These problems are noticeable, because they interfere with children’s normal functioning at home or school.

Aggressiveness, disobedience and conflicts with other classmates are visibly noticeable. Thus, parents and teachers realize something is wrong.

On the other hand, internalizing symptoms often go unseen, which is paradoxical since they’re more frequent. However, these might be subjective elements that belong to the internal world of the child and adults can’t detect them.

Besides, these difficulties don’t cause any problems to family members, teachers or classmates, since the suffering occurs inside the child.

In this sense, if you’re a mother, pay attention to your child’s behavior, even if it’s not upsetting or striking. Notice what they think of themselves and others. Check their emotions, look for excessive or inappropriate fear for their age. These details may be internalizing symptoms that constitute alarm signs.

In conclusion, if you detect internalizing or externalizing symptoms in your children, don’t overlook them. They may disappear once they grow up or they may develop into more serious disorders. Thus, if you have concerns, visit a psychologist and ask for help.