These Jean Piaget quotes remind us of the importance of children's natural development through the legacy of one of the most renowned child psychologists in history. 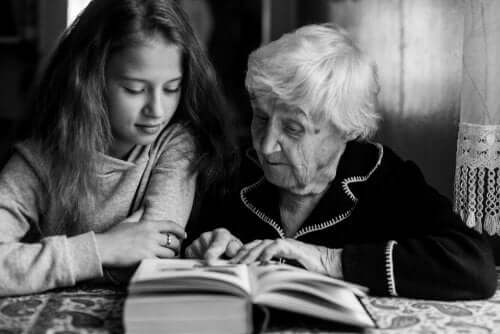 In this article, you’ll discover some Jean Piaget quotes. He was one of the most important child psychologists of all time, who studied child development. Interestingly, his children were unwittingly the “guinea pigs” for his scientific research.

But we mustn’t consider his children “guinea pigs” per se. Actually, the psychologist simply observed them. This observation led to one of the most interesting evolutionary psychology theories of modern pedagogy.

Who was Jean Piaget?

Jean Piaget was a Swiss constructivism psychologist. Born in 1896, he studied children’s cognitive and intellectual development in detail. Such was the magnitude of his results, that his investigations are considered crucially influential on current pedagogy and developmental psychology.

He obtained his doctorate degree at the University of Neuchâtel in 1918. After that, he began working at psychological institutions in Paris, where he collaborated with another important psychologist, Alfred Binet.

In 1919, he began developing his theories seeking the nature of knowledge. Since that year, he published several studies on child psychology based on his research, which was based, in turn, in observing the development of his own children.

Among Piaget’s greatest contributions to the world of child psychology, his theory on sensorimotor intelligence stands out. This theory describes the development of practical intelligence based on actions from emerging concepts.

From now on, you’ll discover and analyze a series of Jean Piaget quotes. They contain a lot of knowledge that’ll allow you to delve deeper into the world of children.

“Each time one prematurely teaches a child something he could have discovered for himself, that child is kept from inventing it and consequently from understanding it completely.”

Jean Piaget was a strong advocate of children’s natural development. Thus, if you go ahead and teach them something before they discover it, you won’t allow them to take those small steps themselves. For Piaget, adults should be observers and guides, not teachers.

“Knowledge, then, is a system of transformations that become more progressively adequate.”

If you look closely at the people around you, including children, those who know the most, who have higher education and more training, values, and intelligence, are those who best know how to act in any situation. Thus, knowledge is what has allowed these individuals to transform to find the appropriate behavior for any time.

“If you want to be creative, stay in part a child, with the creativity and invention that characterizes children before they are deformed by adult society.”

Today, creativity is a highly sought-after skill by recruiters from all types of companies. However, people lose this skill as they get older.

For Piaget, the best way to remain creative is to never lose sight of the connection with your inner child. If you try to see life as children do, you won’t lose the ability to invent, imagine, and create. Although this comes naturally to children, it’s quite difficult for adults.

“Intelligence is what you use when you don’t know what to do.”

This quote incorporates one of Jean Piaget’s great maxims. Humans learn through experience. But to experience, they need to use intelligence. Thus, when humans reach a point in which they have no knowledge to move forward, they’ll have to use their intelligence in order to find the best way to proceed.

“Equilibrium is the profoundest tendency of all human activity.”

Life is all about finding balance. Sometimes we call it happiness, while other times we call it fulfillment. Therefore, the important thing is to find that point where you feel good about the way you are, act, and handle problems.

These Jean Piaget quotes show us that he was an interesting and clever psychologist who worked continuously to try to understand children better. Thanks to him, today we’re all able to better understand children and raise them to become balanced, self-confident adults who believe in their capabilities.