Learn All About Secondary Enuresis

Psychological causes represent the most important factor in secondary enuresis. If your child starts wetting the bed after a period of continence, they may be asking for help. 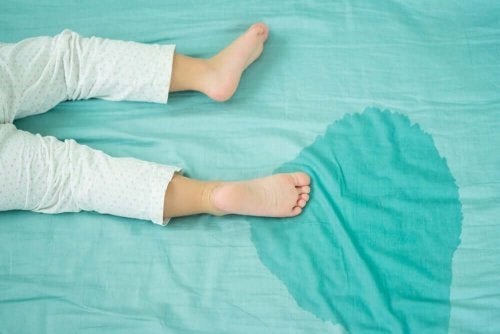 From two years of age, most children stop using diapers and start potty training. Some take longer than others. However, some children wet themselves again after a long period of dryness. Why does this happen? In this article, we’ll talk about secondary enuresis.

Enuresis is the involuntary release of urine, either while awake or at night in bed. This issue must occur each day for at least three consecutive months and in children older than four.

While most children stop using diapers at age two, although this time varies depending on each person, a four-year-old should have no problem controlling their bladder. From this moment on, the situation can begin to be considered pathological.

This condition goes away spontaneously in a large percentage of children before they turn six. Still, it affects between 10 and 13% of six-year-old children and up to 8% of ten-year-olds.

Depending on when the incontinence occurs, enuresis can be classified into:

Another very important classification refers to whether the child already knows how to control their bladder or not. This way, we can distinguish:

The causes of secondary enuresis