Stuttering in Children: What You Need to Know

Although stuttering in children should not be a serious problem if it occurs exclusively during early childhood, it can cause problems in the future if it persists over the years. 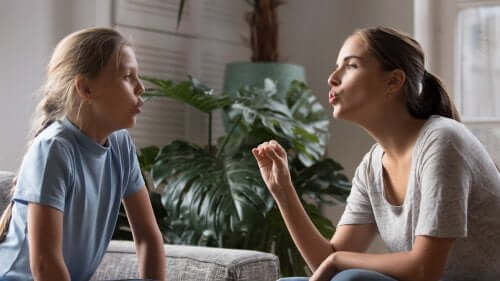 Stuttering remains a real mystery today, although it’s relatively common. It’s also an issue of great concern, since stuttering in children can cause a number of problems both in the present and future, at a personal and social level. Find out more in today’s article.

Stuttering in children: What does it involve?

According to the University of Rochester Medical Center’s Health Encyclopedia, stuttering is a speech problem. Specifically, it’s seen in the interruption of normal speech flow. Therefore, a child who stutters is one who repeats or prolongs sounds, syllables, or words. In this way, we can differentiate between three types of stuttering in children:

When does stuttering arise in children and how does it manifest itself?

Stuttering in children may occur at about age two, as it coincides with children’s ability to produce more complex and longer sentences. In fact, according to the Spanish Stuttering Foundation, it’s common for children between two and five years of age not to manifest fluency in speech.

According to Drs. Barry Guitar and Edward G. Conture of The Stuttering Foundation, stuttering may begin suddenly. However, its appearance may not be easy to notice, as it can evolve gradually and go unnoticed at first.

In relation to the way it manifests itself, stuttering differs greatly depending on the child and the type of stuttering present. For example, there are children who stutter daily and even in every sentence they pronounce; or they may stutter from time to time.

On the other hand, some children tend to stutter depending on the situation they’re in, such as if they feel angry, nervous, etc.

What are the effects of stuttering on children?

Stuttering in childhood can often lead to frustration and embarrassment. In this case, it’s very likely that children who stutter will try to speak as little as possible, explaining themselves in very short sentences. They may prefer to avoid speaking altogether.

However, during early childhood, experts don’t consider stuttering a serious problem. This is because, in most cases, stuttering fades away once the child’s age advances.

On the other hand, stuttering can become a serious problem if, at the end of primary education, the child continues to stutter. Actually, stuttering doesn’t affect the child’s academic performance, but it does deeply affect their social skills.

Children who stutter won’t want to participate in class and will have more difficulty in relating with others. This isn’t only because of the embarrassment that stuttering causes. It’s also because they avoid speaking as much as possible, meaning they have less ability to interact with others.

What can I do if my child stutters?

To begin with, the main recommendation is to see a specialist. There are several speech and language treatments and therapies that can help manage and reduce stuttering.

However, you can also work on stuttering at home. The National Health Service in the UK offers a number of tips to help children who stutter to improve their speech:

“Stuttering is a disorder in the social presentation of the Self. Basically, stuttering is not a speech disorder, but the conflict is resolved around the Self and the role; it is an identity problem.”

In conclusion, although stuttering in young children is certainly not an issue to be alarmed about, it can become a serious problem if the stuttering continues.

Seeing a specialist, as well as developing social skills, communication strategies, and emotion management are some of the options which can help to improve speech fluency in children.

How to Improve Speech Disfluency
When children begin speaking, they may sometimes have a hard time pronouncing certain sounds. Today, we'll tell you how to improve speech disfluency. Read more »
Link copied!
Interesting Articles
Childhood psychology
Dermatophagia in Children: What Is It and How to Treat It?