4 Definitions of Family: Perspectives Worth Considering

What’s a family? There are several definitions of family, approached by different schools of science, countries and laws. Discover them here. 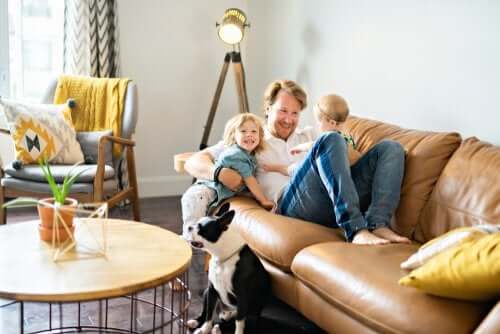 Do you want to know about the different definitions of family? They’ve all been conditioned and influenced by the social laws in different parts of the world, as well as cultural and economic factors. In this article, we’ll share some of the best-known ones.

The origin of the word “family” isn’t very clear. It’s said to come from the Latin word “fames,” meaning “hungry.” However, others claim it derives from the term “famulos,” which means “servant.” Therefore, experts believe that people used the concept of family to refer to the slaves and servants who were under the authority of one man.

Over time, families have evolved, meaning that family concepts have also changed. Below, we’ll share the most prominent worldwide concepts.

A family is a group of people united by blood or emotional or adoptive ties. Thus, a couple and their children comprise it. In some cases, other people coexist with them, related by different kinships linked to them, such as grandparents, nieces and nephews, and aunts and uncles, among others.

Emotional ties in a family

The process of interaction between you and the people you live with strengthen emotional ties. Therefore, you have a close family relationship with people due to kin by adoption, blood, or affiliation. This is how the beautiful quality of love and fraternal affection develops.

Definitions of family: classification of the traditional and modern family

There are different levels of kinship in a family unit. In other words, not all the people in it have the same closeness or relationship. This is due to the growth and evolution of society, which has caused a lot of family changes.

This refers to the group formed by the father, mother, and children, where parents are the ones responsible for financially supporting the family. They must also provide protection, security, and spiritual guidance. Extended families also exist. They’re composed of the couple’s parents, uncles, cousins, and others who lack a home or someone to care for and provide for them.

The mother, father, and a member who has blood ties only with one of them comprise this type of family. This is the case when one spouse already has other children or when the couple decides that another family member, such as uncles, cousins, or nephews, go live with them.

This refers to families consisting of a single parent who raises their children on their own. This may occur because the parent became a widow, divorced their partner, or decided to be a single parent. This type of family is becoming more and more common nowadays, due to the major changes that society has undergone in recent years.

They consist of the union of two single-parent families, where the parents unite due to a sentimental relationship. Thus, they form a family. On the other hand, there are cases in which spouses unite only by a sentimental attachment. In other words, they have a family relationship although they don’t get married.

In summary, the definitions of family pertain to our human nature and need to belong to a specific group in society.

Separations, New Additions, and Family Bonds
Family bonds can be created as easily as they can be broken. New additions and separations in a family can be emotional rollercoasters. Read more »
Link copied!
Interesting Articles
Childhood psychology
How to Act in Case of School Phobia

Raising a child
What Does Inquiry-Based Learning Consist of?