Learn All About Sleep Problems in Teens

Different physiological processes occur in our bodies when we sleep. In this article, learn all about sleep problems in teens. 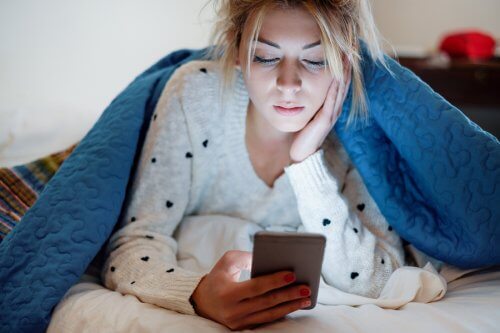 Sleep problems in teens are quite common, mostly because teens tend not to sleep as much as they need to in order to ensure their body works properly. Sleep quality influences brain maturation, which goes through a critical stage during adolescence.

From puberty until the age of 18 or 20, the brain is hard at work creating neural networks. These changes are highly significant for teens’ healthy development in the future, both on a mental and emotional scale.

Sleep problems in teens are most commonly associated with neurological or psychiatric disorders. However, some sleep problems are caused by a simple lack of healthy habits.

Not resting for a few nights in a row will most likely lead to a sleep deficit. This, in turn, affects teens and makes it harder for them to concentrate and study. It also affects their social relationships and mood.

There are five stages of sleep that repeat cyclically. Stages 1 and 2 are the transition between wakefulness and sleep. Here, your body begins to lower your heart rate and breathing rhythm, along with your body temperature and eye movements.

During stages 3 and 4, which represent deep sleep, growth hormones are released.

Meanwhile, stage 5 is called REM. This stage is characterized by rapid eye movements. During this stage, your muscles activate, your metabolism accelerates, and you experience vivid dreams.

Each stage lasts approximately three hours. In teens, these stages should repeat three or four times a night. Teens tend to need sleep later in the day than adults or children. Thus, they need more hours of sleep in the mornings.

Sleep problems in teens manifest when they go to bed too late in relation to how early they need to wake up the next day. Why does this happen and what are the possible consequences?

Why teens stay up late

The reason why young people go to bed late is usually because they’re simply not sleepy. The changes in teens’ heart rate makes them fall asleep later at night and wake up later in the morning.

Although teens should go to bed at 9 or 10 p.m. and wake up at 6 a.m. according to school schedules, this is unnatural for them. The heart rate changes that they experience make their bodies release melatonin, the hormone that regulates the body’s circadian rhythm, a lot later, at about 11 p.m.

All this indicates that sleep problems in teens are caused by a culture that doesn’t respect their natural rhythms. Since people nowadays only tend to care about work and consumption, humans’ biological needs have been put in the back burner.

If schools stopped forcing young people to adapt to schedules that go against their biology, children and young people wouldn’t suffer from sleep or attention deficit disorders.

“All this indicates that sleep problems in teens are caused by a culture that doesn’t respect humans’ natural rhythms.”

What if sleep problems become chronic?

In adults, lack of sleep can cause all kinds of accidents. In fact, 50% of car accidents are caused by young adults under the age of 25 with sleep problems. Specifically, what organic alterations do sleep problems cause in teens?

Stress from lack of sleep increases cortisol levels. This leads to glucose homeostasis, which can cause type 2 diabetes, obesity, or Cushing syndrome.

Here are other common causes of sleep problems in teens:

Prevention of sleep problems in teens

When fatigue stems from bad habits, it’s best to change them for better ones. Eating a healthy diet, practicing sports every day, reducing the use of electronic devices, and reading can help prevent sleep problems in teens.