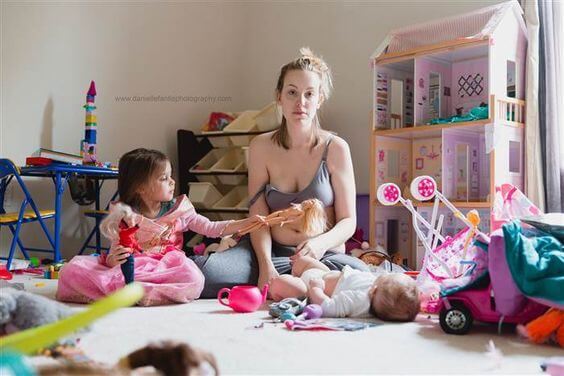 The protagonist in the viral photo is Kathy DiVicenzo. This anonymous heroine initially uploaded an image worth more than a thousand words to her Facebook account.

The photograph where she is overwhelmed with her two children quickly went viral because it captured the essence of postpartum depression, an illness that is not often talked about.

Although mothers usually do not comment on it loudly and prefer to silence it, official statistics speak for themselves. According to the U.S. Centers for Disease Control and Prevention, one in nine mothers suffers.

Postpartum depression is a syndrome that happens after a woman gives birth. It can be suffered in a moderate or intense way. It usually occurs within the first three months of the baby’s life, although it can also manifest within the first year after delivery.

A viral photo: an x-ray of a silent illness

The shocking viral photo has spread around the world. It has brought to light a disorder as common as it is silent. Consequently, it is misunderstood by many people.

In this blunt image, Kathy can be seen with her two children. The location was not prepared for the photo, but remains natural. All three appear on the floor of an untidy room, full of toys. It’s not only the devastation on Kathy’s face that communicates her sorrow.

Each child also occupies an interesting role. The eldest daughter tries to get her mother’s attention while the baby lies on the floor, wearing a full diaper. But the picture is completed by Kathy’s appearance, putting a stamp on the problem.

The mother, disheveled and gray, looks misaligned in an ill-fitting bra. On one side, it is “low,” referencing the breastfeeding period and all that it entails (the good and the bad). Her face is also an ode to the cycles of tiredness, living proof of how exhausted she is.

The other side of the same coin

But that posting, in fact, was not all. This American mother uploaded another image in parallel, a counter-face in which the scene changes drastically. On this occasion, the first thing we notice is that the room is tidy.

In addition, the girl watches her mother with a smile on her face, playing with her two dolls. Meanwhile, the baby is dressed and lying on a fluffy quilt. The greatest change and contrast has to the with Kathy, who is groomed, well-dressed and smiling. More rested, she looks radiant, happy and full.

“These two images represent my life depending on the day. However, I would only be comfortable sharing one of these realities, and that is the problem. I’m afraid you’ll think I’m weak, crazy, a terrible mother or any of the other million things my mind tries to convince me with, but I know I’m not alone in those thoughts.

In this way, Kathy DiVicenzo successfully “ends the stigma and breaks the silence” that surrounds this issue. This mother goes even further by encouraging all mothers who have this condition to share their experiences so that “everyone knows they are not alone.”

The U.S. National Institute of Mental Health defines postpartum depression as a “mood disorder that can affect women after childbirth.” According to experts in the field, the causes of this illness respond to a mixture of physical and emotional factors.

There are many signs that indicate a mother is suffering from this disease. It is essential to receive the necessary support in order to avoid the development of more serious complications. The symptoms and risk factors to be taken into account include the following: