How to Deal With Your Children Lying to You 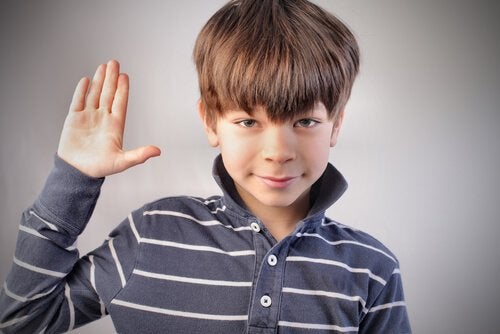 The first episodes of lying occur between 2 and 4 years of age. Although your children lying to you may not seem positive in the slightest, lying is actually a part of children’s social and cognitive development.

However, it’s important that you instil the value of honesty in your children’s education from a young age, and show them just how important it is to tell the truth.

As children grow up, they start to understand and differentiate what’s true from what’s false, and you must help them make the right choice. If you catch your children lying, take it as an opportunity to teach them about the importance of honesty.

Why do children lie?

The causes of children lying differ depending on their age. The most frequent causes are:

How can you deal with your children lying to you?

Ask them to promise to tell the truth

Before asking them what happened in a determined situation, make an honesty agreement with your child. This commitment, along with a good attitude on your part, usually leads children to tell the truth.

Talk to your children in a comprehensive but firm way so that they feel safe and comfortable being honest with you and the rest of the people around them.

Explain to them that honest behavior doesn’t lead to punishment

When you use punishments as a teaching or correcting method, the results are never satisfactory. There’s no point in disciplining children with fear. It doesn’t work and it doesn’t encourage them to follow ethical practices.

If you tell them from a young age that telling the truth isn’t necessarily associated with punishments or bad situations in general, they’ll have more trust in you. That being said, avoid lying in front of them.

Honesty is a value that should be taught at home, and children’s parents are always the main example they follow.

Establish a “truth-rule” at home

Within your family dynamic, establish a rule (highlighted in golden letters, if you want it to be more visual) that invites your children to tell the truth. Teach them that being honest, even when it may bring unpleasant consequences, is a value we must carry throughout our entire lives.

Find out why they lie

When you know why your children have been lying, it’s easier to develop a plan to fix it.

During the first years of age, focus on teaching them to differentiate reality from fantasy. As they start to get older, you can start touching on other subjects like lying to call people’s attention, to please others or to get out of a bad situation in an easy way.

If you’re absolutely positive that your children are lying, give them one last chance to be honest. A phrase such as “I’ll give you the opportunity to tell me what actually happened” may be the impulse they need to finally be honest.

Talk to them about the consequences of lying

Sit down with them and have a conversation in regards to the natural results that lying brings. Let them know that, when someone isn’t honest, other people begin to question everything they do.

A good idea is to tell them stories or situations in which lying had bad results. Make sure they’re aware of the consequences of their actions so that they begin to think before acting.

Give positive reinforcement to appropriate behavior

When your little ones tell the truth, no matter if it was difficult for them to do so or not, don’t hesitate to give them positive reinforcement. A compliment could motivate them enough to continue being honest and, little by little, stop telling lies overall.

Get professional help if none of these strategies work

Don’t be afraid to recognize when your children’s lies go overboard. It’s no secret that this type of behavior can lead to issues at home and school. Never underestimate this behavior, it may be a pathological condition that needs to be treated by a professional.

Don’t panic when your children lie to you. On the contrary, see it as a sign of proper development and take advantage of those moments to promote values. It’s necessary for you to pay attention to your children’s behavior and make the necessary corrections in order for them to live an honest life.