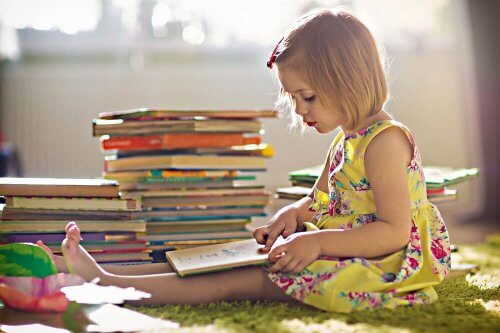 There’s nothing better to awaken a child’s curiosity than children’s stories. In this article, we’d like to mention a few stories by Argentine writer Jorge Bucay.

There are numerous positive benefits that come from introducing our children to reading. There are also specific stories that can stimulate critical thinking and a reflective spirit. Today we’ll cover five children’s stories by Jorge Bucay that fall into this category.

Jorge Bucay is a writer and therapist. He was born in Buenos Aires, Argentina in 1949. He graduated as a doctor from the University of Buenos Aires in 1973.

After several academic achievements and recognition in his field, he began to participate on TV programs discussing the topic of psychology. He even became a host.

As for his literary phase, Bucay tries to offer therapeutic tools through his books that help readers heal themselves.

That’s also the main goal of Jorge Bucay’s children’s stories. Although many are not categorized as such, they are rather “stories to think about.” (This is the name of one of his books that compiles these stories.)

His stories are directed to young readers in order to inspire them to ask questions and find answers on their own.

I work on the idea of taking control of your life, what you have is your responsibility. I believe that the world is not a place to compete, but rather a place to share. In order to accomplish this, it is necessary to reflect internally – Jorge Bucay

The first story by Jorge Bucay that we’d like to share with you is about a child who visits the circus for the first time. Everyone was impressed by the elephant’s strength and ferocity. It was also the animal that caught the child’s attention.

The child, however, couldn’t understand how, once the show was over, the elephant remained tied with a large chain to a small stake in the ground.

Why doesn’t the elephant escape? He asked. The child grew up without finding an answer until someone helped him out.

He eventually figured out that the answer lied in self-limitation – that of the elephant as well as human beings. They can remain chained their whole lives without questioning it.

This story may be too abstract for some children to understand its main idea. It has a very subtle way of describing the nature of these two feelings.

The is one of the shortest stories by Jorge Bucay. It will help your child to better understand their feelings. It will also teach them how to identify and deal with their emotions.

This is another one of Bucay’s stories that is related to the feeling of self-limitation. It tells the story of a man who walks quietly on a path. Suddenly, he sees a great city on the horizon. A city where all his desires and goals live.

He then decides to visit this city. Although the road seemed simple at first, several difficult obstacles appear along the way and cause the main character to struggle to reach the city.

When he sees a child smiling at him, the man asks: “What are you laughing out at?” The child’s response comes at the end of the story and it makes it clear to the reader that on many occasions, limits and barriers are made internally.

This stories tells the tale of a lucky man who finds a chest full of coins on his patio. Although he claims not to be greedy, he begins to imagine what he can do with so much money. Later on in the story, his neighbor claims that the chest is his, since his grandfather was the one that had buried it.

The conclusion of this story, although it may be somewhat crude, makes us think about the true intentions of human beings. We are often contradictory. The story also encourages reflection on the dangers of ambition.

Encourage yourself to fly

This tale tells the story of a father who teaches his son how to “fly.” He invites his son to try out his wings to jump from a huge precipice.

The son who becomes influenced by the negative opinions of the people around him begins to doubt the task his father asked him to do. Instead, he decides to jump from a tree. In doing so, he falls to the ground.

After falling, he asks his father for explanations and he finds the real reason why his father suggested the initial jump. This story can help children learn how to face adversity and take risks, even when they’re afraid.

The importance of reading to children

In addition to Jorge Bucay’s stories there are many other authors who write tales that invite your little ones to reflect with the aim of promoting critical thinking.

Listening to stories or reading them can also help children develop their vocabulary. This will improve their spelling skills and their ability to express themselves.

Parents should keep in mind that reading is never a waste of time. On the contrary, it creates an environment that stimulates dialogue.

It also stimulates the emergence of great thoughts that will stay with them throughout their childhood and for the rest of their lives.