Stories About Female Scientists for Children

This article is dedicated to all of the girls who dream of becoming scientists when they grow up. Now, we'll show you stories about female scientists that your children will love. 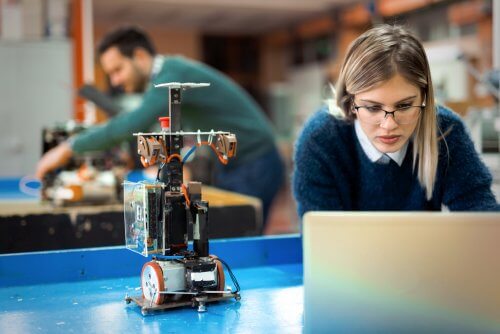 When you think of great scientists in history, you might think of names like Einstein or Newton. However, what about female scientists throughout history?

Society has always left them in the background, giving more importance to the achievements of their fellow men. Of course, that’s when they haven’t been persecuted or accused of witchcraft.

In 2015, the United Nations (UN) declared that February 11 is “International Day of Women and Girls in Science.” The aim is to recognize all of the women in science and honor their achievements.

Today, we’ll show you a few of them. However, we would need countless articles to truly do all female scientists justice.

In this article, we’ll show you three magnificent stories of three great female scientists to read with your children. They’re truly icons of the past, present and future generations.

She was the first mathematician in history. We know that she was born in 370 AD in Alexandria, Egypt. Versed in philosophy, physics, math and astronomy, she was condemned to death by a group of Christians who accused her of heresy.

They brutally murdered her when she was 46 years old. Her research in science and knowledge of literature was so great that she was better than men of her time.

Hypatia: The truth in mathematics

This is a story by Jordi Bayarri. It’s a part of a collection of scientific comics that is perfect for kids between 10 and 12 years old.

Through her story, Hypatia will teach you about the ancient Library of Alexandria. In addition, she’ll tell her what it was like to be a teacher and scientist during the time of Constantine the Great.

She was the mother of chemistry and physics. Marie Salomea Sklodowska-Curie was born in 1867 and was the first woman to achieve two Nobel prizes, both in physics and chemistry. Also, she was the very first person to obtain them.

At first, her husband got the credit for her radiation studies. In fact, she had to ask to clarify the misunderstanding. However, she didn’t register her discoveries so that all scientists had access to them.

Marie Curie: the activity of radium

This is in the same collection of comics as Hypatia, by Jordi Bayarri. In his fourth book, Bayarri brings you closer to the life of this great woman, who discovered things like radium and polonium.

Both her love for science and her commitment to free cooperation among scientists around the world make her the best example of a female scientist.

Valerie Jane Morris-Goodall was born in London in 1934. She’s world-renowned for her studies in primatology with chimpanzees and anthropology. Her scientific research on the behavior, society and use of tools with chimpanzees made her famous in the scientific community. In 2013, she received the Prince of Asturias Award for Scientific and Technical Research.

“If you really want something, you will have to work very hard, maybe more than your male colleagues…”

This is a perfect story to encourage girls to pursue their dreams. Albert, security guard for the camps, tells the real story of Jane every night. In addition, through Jane’s fascinating life, she reminds kids that they should never stop trying to reach their goals.

Finally, some books about female scientists

We can’t finish this article without mentioning certain female scientists in our history. For example, there is Barbara McClintock, who specialized in cytogenetics and won the Nobel prize for her theory of jumping genes. In addition, there is Jocelyn Bell, a British astrophysicist who discovered the first radio signal from a pulsar.

Fortunately, there are some published books that are like small encyclopedias about the lives of these female scientists and some more:

We hope that these stories about female scientists will help you inspire girls in science and help them pursue their dreams.

4 Books About Science for Children
Children often find science fascinating, so we're sure these books about science will thrill your kids and leave their imagination and curiosity soaring. Read more »
Link copied!
Interesting Articles
Social environment
How to Foster Good Sibling Relationships

Raising a child
The Importance of Practice in Education

Raising a child
Research Projects as a Learning Tool

Today, teachers need to move away from traditional teaching methods. In doing so, they must also educate themselves in order…

David Pau Ausubel, a psychologist and pedagogue born in New York in the year 1918, developed the meaningful learning theory.…

Raising a child
The Importance of Practice in Education