All About Interactive Toys and Games for Children

Interactive toys and games for children represent a future full of learning with the help of new technologies. What do we need to know about them? 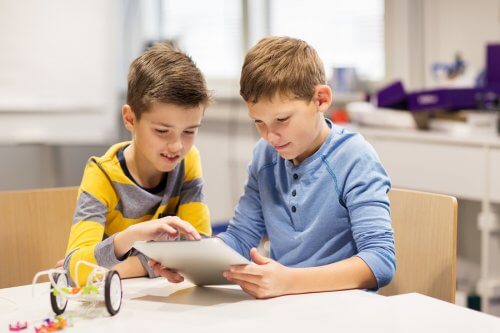 There are a wide variety of interactive toys and games for children to explore. They include everything from video games to robots to mini computers. The goal of this type of tool is to stimulate the imagination, logic and intelligence of children.

All games and toys share a common purpose: entertaining children. However, they also play a significant role in stimulating their intellectual, motor and psychological development.

We’re living in a day and age where technology is advancing by leaps and bounds. As a result, there are more and more new possibilities that allow children to adapt to the technological future that awaits them.

For this transcendental reason, we want to present you with the information you need regarding interactive toys for children. Do you happen to have one in your own home?

Interactive entertainment, both as a term and as a new form of recreation, appeared around the year 1990. This type of entertainment is aimed at both children and adults. Their appearance coincides approximately with the invention of the internet.

This allows children to enjoy games on their own that they’d normally only be able to play with a partner or opponent. This is thanks to the help of software that contains the programming necessary to calculate and respond to the possible movements during a game.

However, this doesn’t just apply to computer games. Now, children and adults can try their hands at games that involve a certain level of artificial intelligence.

This way, children can play, for example, with robots that imitate a dog’s movements and attitudes in a lifelike manner. Or, they can play tennis in the comfort of their own homes without having to go to a tennis court.

All you need is a game control in hand and to imitate the movements of the racket. Instantly, you’ll see your movements reflected on the television screen. This is the case, for example, with Nintendo and Wii.

In this way, interactive toys and games allow for an even wider range of entertainment options and sensory stimuli. According to child psychologists, this sensory stimuli is so real that children today are reaching higher levels of consciousness and intelligence.

“The goal of this type of tool is to stimulate the imagination, logic and intelligence of children. At the same time, they offer children the opportunity to play and learn at the same time, with the help of technology.”

Interactive toys and games for children

Some 20 or 30 years ago, children spent their time playing with dolls, bikes, board games, construction games, and the like.

However, the current generation of educational toys has advanced so much that children can have fun through augmented reality. To do so, they look to physical tools that possess the most advanced technology.

This fact is visible in many learning objects. These include interactive projectors that offer children the opportunity to spend hours playing in virtual settings. There, they can control the game with their hands, legs, electronic pencils or other objects and keyboards that are part of the game itself.

Examples of this kind of video game include The Virtual Piano, The Floor is Lava, and a number of different sports games.

At the same time, within this category we also find toys that, while less advanced, include different technological elements. Therefore, small children can interact with music, lights, colors, sounds, vibrations and words. In the same way as the above games, they transport little ones to a different reality.

Finally, all of this translates into high-quality sensory stimulus, allowing children to have more complex experiences when it comes to having fun.

In the future, there is sure to be an even greater dominance of augmented reality when it comes to interactive toys and games.

Just the same, there are still many fun options where interaction goes hand in had with simpler mechanisms. For example, the manipulation of keys, where children receive visual and auditory stimulus without entering the realm of virtual reality.

In these cases, the options that parents tend to choose the most are educational tablets, educational music tables, educational smartphones, or robots that help children memorize words.

In conclusion, you should know that it’s in no way negative or dangerous for your children to become familiar with new technology and virtual reality. However, you should make sure the games they play are educational and age-appropriate, and limit the amount of time your child spends using them.

Keys to Organizing Study Time for Children
The keys to organizing study time and doing homework will help students to accomplish their goals and bring them more academic success. Read more »
Link copied!
Interesting Articles
Parenting
What Is Platonic Co-Parenting?