Home » Parenting » Learn how to be a mom » Behavior

When educating our children, we need to be positive to respect their self-esteem and not hurt them. The three warnings technique is a good example. 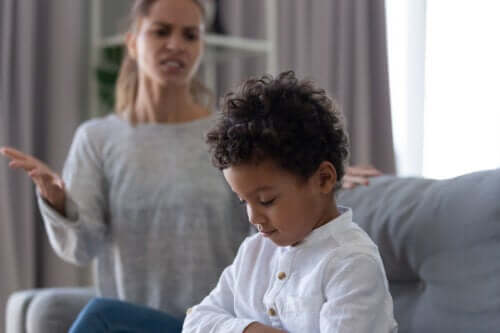 We mustn’t use negative behavior and treatment toward infants, since this affects their attitude and behavior negatively. This technique makes it possible to give children warnings positively and is also quite effective. Want to know what it is?

Sure, when your child doesn’t listen, you have to repeat yourself a million times to get their attention, and they still don’t obey; this leads you, most of the time, to get angry, lose patience and end up screaming at them. But it’s precisely this that you shouldn’t allow to happen.

Shouting and bad techniques end up damaging the little one and their self-esteem. Also, we, as parents, end up feeling bad for having shouted at or spoken to them in bad ways. So, we don’t have to reach that point to avoid damaging their emotional development.

Therefore, this three warnings technique is effective and children end up getting used to it, after which, if they haven’t done what they’re asked, there’ll be consequences (loss of reinforcements or privileges, not punishment).

While shouting has short-term results, in the long run, they have more negative consequences, so it’s not ideal to do it. With today’s technique of discussion, even though the results take longer to obtain, it’ll prevent any future problems.

How to use this technique?

It’s important to understand that when we use this technique, we use it gradually and control the tone of voice in all three. This is very important.

On this first warning, you should use a calm and relaxed tone. You could even use an affectionate tone of voice: “Please, can you pick up your toys?”

If after the first warning, the child doesn’t listen, then you have to move on to the second warning. Here, the tone of voice has to be more serious, so that the child realizes that you’re not playing and that they have to do what you’re asking them to do.

If neither the first nor the second warning worked, you’ll have to use a third warning. This time, you’ll use a stronger tone of voice and, showing complete certainty, you’ll ask them to do as they’re told one last time what the consequences will be if they don’t do it.

You should always use the loss of privileges, and never resort to punishments. If the child does what they’re told, you can reward them with something that they want and that isn’t materialistic. For example, it can be watching a movie together, playing with them, making their favorite food, etc..

If, despite this, they don’t do as they’re told, in a totally serious tone you’ll tell them it’s wrong to ignore you and, most importantly, that they have to do what you’re asking, even if it has to be an order.

What to take into account when applying this positive technique?

About the positive three warnings technique

This technique can be very effective if done correctly. We must always bear in mind that if we’re angry or upset, it’s better to take a few minutes to calm down before we do it, because otherwise, we could say something that isn’t right.

School bullying is a major concern among parents and teachers, since it has become more common in recent years. In…

Behavior
5 Keys to Raising Children in the 21st Century

Today, we live in an era where parents are more educated than ever. However, there’s also more doubt than ever…