The main character of "Bao" needs to face the fact that her son is older and independent. However, for a mother, dealing with empty nest syndrome isn't easy. 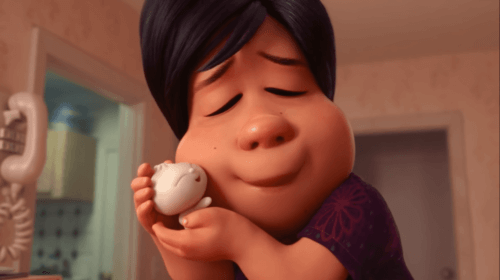 Bao is a short animated film that shows the consequences of having to stop raising children when they leave home. This short film, which deals with empty nest syndrome, won the Oscar Award for Best Animated Short Film in 2019.

Interestingly, Bao is the first Pixar short film directed by a woman. Its creator, Domee Shi, captured all the feelings that mothers have when their children go out on their own. In addition, she managed to do all this in just 3 minutes.

“The important thing about a family is not living together, but being united.”

Bao stars a Chinese-Canadian woman who feels lonely and discouraged. At the beginning of the short, you can see how the woman cooks steamed bread rolls to eat with her husband.

However, to her surprise, when she tries to take a bite out of it, it comes alive and starts to cry. From then on, she feeds and takes care of the little bread roll as if it were her son. Little by little, it starts to grow up, and demands more freedom and autonomy. However, the mother is excessively overprotective with him, and won’t let him play sports with other children.

Then, when he becomes a teenager, he becomes rebellious and stops spending time with his mother. She feels crushed. However, the biggest problem happens when he introduces her to his girlfriend. Then, he announces his plans to move in together, leaving the family home.

This overwhelms the women. In a fit of rage and anxiety, she decides to eat the steamed bread, that is, her own son. Immediately, she regrets what she did and cries inconsolably.

After this, you see how sad the mother is in her room. Then, her real son appears in the room, who is a real person. They make up, showing how much they love each other.

Finally, you can see the whole family together, including the son’s girlfriend, making steamed bread rolls. The last scene shows how happy the mother is having overcome empty nest syndrome.

Some thoughts on this animated short film

This wonderful animated short film lets us reflect on how important it is for mothers to get ready for their children to leave the house. To do this, you first need to accept that one day, it will happen.

Keep in mind that children grow up to become adults who need to create their own life projects and plans. This doesn’t have to be something sad and bleak. On the other hand, you can look at it as another stage of motherhood.

If mothers dedicate so many years to raising their children in the best way possible, surely there’s a strong emotional bond between them. These bonds remain forever, even when it’s time for the kids to move out.

“Sooner or later they leave for their long journey. They won’t go with much, just the values and love you could give them when they were yours. Only then will life itself tell you if your legacy and teachings have been good. Just remember that sooner or later, they leave.”

How to Stop Suffering as a Mother
Suffering as a mother won't help you become a better person, nor will it set you apart from other moms. Discover more in the following article. Read more »
Link copied!
Interesting Articles
Enjoy motherhood
The Benefits of Having a Tribe for Mothers

Having a tribe is essential when it comes to the act of motherhood. Mothers need to be with other mothers.…