Is Maternal Instinct a Myth or Reality?

Maternal instinct refers to the relationship that exists between a mother and a child that unites them in a special way. Some claim that it's a norm of society, others that it's a natural instinct. Discover why it's such a debated topic. 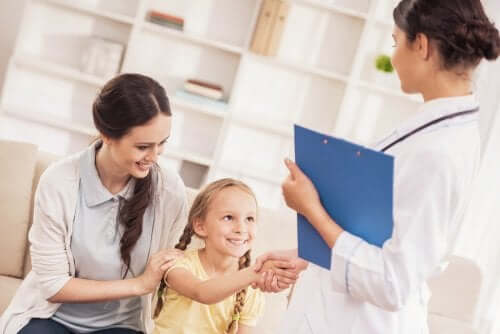 Social norms still often dictate that women should marry and have children. With regards to having children, there has been much debate regarding whether maternal instinct is a myth, or if it really exists. It’s also been a matter of debate as to whether the desire to be a mother comes from culture, or if it’s an innate part of their biological makeup.

You can decide for yourself as we present both sides of the argument. We’ll look at those who think that maternal instinct is something we’ve invented, and those who think it really exists.

What is maternal instinct?

For those who hold that maternal instinct exists, they define it as the link or relationship that exists between a mother and her child. They maintain that hormonal changes play a fundamental role in that feeling appearing, even in the early stages of pregnancy.

There are also many women who say they’ve felt it, or still feel it. It can even happen in women who don’t have children. There are also psychological and physical factors that help this feeling to appear – after an adoption, for example.

Maternal instinct also refers to the personal relationship between a mother and her child that endures over the years. This helps her to care for, protect, and spoil them (in a positive way!), regardless of their age. Its proponents say that it’s a necessary feeling for human survival.

The maternal instinct: myth or reality?

Every woman has the natural capacity to be a mother. However, motherhood is a personal decision. Many women have voluntarily renounced being a mother, in order to devote themselves to other things they’re passionate about. Others simply don’t want to be mothers.

So, if it’s true that maternal instinct is a universal feeling that exists in all women, then this could be evidence that it’s actually a myth.

On the other hand, there are also the biological and hormonal factors that accompany this type of feeling. An example of this is the action of prolactin and oxytocin, and also the changes that occur in the brain when a woman is pregnant.

All of this, added to the physical contact the mother has with her child, automatically awakens love and interest in the child. However, some experts say that this is simply our innate survival instinct.

The maternal or survival instinct

Those who oppose the idea of maternal instinct point out that the relationship that appears between the mother and her child can be put down to survival instinct, as we’ve just mentioned.

This is because humans are social beings who depend on others, especially on the family, in order to develop and reproduce. However, unlike most animals that raise their babies and then leave them, humans keep loving their children, regardless of their attitude.

That’s why those who see the maternal instinct as a reality agree that it’s also part of our natural human survival instinct. The feeling appears in many women before they become a mother. However, it becomes even more acute with childbirth, breastfeeding, and adoption.

On the other hand, the same feeling can be dissipated by emotional factors such as postpartum depression and fears imposed by society.

The decision to become a mother

Becoming a mother is a personal decision that a woman takes according to her emotional, mental, physical, and economic stability. Unfortunately, these days there are still some cultures where motherhood is something that is imposed on a woman.

However, what these cultures don’t take into account are the changes that motherhood brings about. It affects every part of a woman’s life and, because of this, they must be allowed to make their own decision.

A woman must be able to make the decision that will bring her the most happiness. Human beings can be very complex, and culture, society, and religious beliefs can easily dictate what we should be doing.

In conclusion, whether the maternal instinct really exists or whether it’s a myth is still open to debate. Its proponents affirm that it’s something real that women experience either before, or as a result of, giving birth. Its opponents believe that it’s a reaction to the pressures of society and culture, and a means to ensure survival.

However, the real point here is that women should be free to decide whether they want to be a mother or not. We need to realize that it’s possible for them to find personal fulfillment in life in many other ways too.

What Does “Maternal Instinct” Mean?
There are some sensations that only a woman who has a child experiences. So, just what is a woman's "maternal instinct" all about? Read more »
Link copied!
Interesting Articles
Behavior
4 Discipline Problems in Children and How to Deal with Them

Motherhood can be chaotic and it's normal for you to make mistakes every day. You'll make lots of mistakes, but…