My Son Is Loving, Sensitive and Affectionate 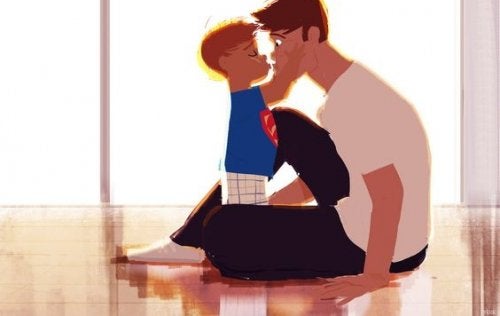 Boys also deserve and need to taken care of in a sensible and sensitive way. A boy can be just as sensitive and affectionate or even more so than a girl. Educating boys properly from an early age on how to develop their emotional skills can allow them to resolve conflicts in a better way. It can help them have better communication skills and to be more empathetic and assertive when they are older.

In today’s world, a lot of us perceive that our fathers and even the younger generations of men are lacking something when it comes time to managing and expressing their most personal feelings. Feelings such as fear, frustration, sadness, insecurity….

When there is something to worry about, the male brain is taught to contain it, shove it deep down until it eats them up in order to not show what some define as “weakness of character.”

In fact many families still insist that boys “don’t cry” and must “be strong”, or “don’t do things because they make you seem like a girl.”

We should never forget that when we teach a child to shut up, playoff or drown their emotions, we are generating future frustration for them. If we laugh at their tears or behavior we are  simply replacing those emotions with rage.

It doesn’t make any sense to bring someone into the world just to constrain them and to put up walls and fences around their emotions.

It’s no surprise to parents who have educated their sons with respect and intuition that boys are incredibly affectionate, sensitive and caring from birth. Showing love is not the exclusive territory of only one gender.

Tears are not female property; they are the natural and necessary expression of an emotion, something we should not play down.

This is an undeniably interesting concept and to develop it we must have something in mind: boys’ brains mature slower than that of girls.

In the same way, boys are also more vulnerable to the effect of maternal stress during pregnancy. It is as though female neurobiology has at its disposal stronger and more resilient mechanisms to confront negative emotions, even since life in the uterus.

Furthermore, even in “extra uterine” our boys need a little more attention when it comes to the emotional field than we initially thought.

On average, but not in 100% of cases, boys are more likely to show their frustration when they do not obtain what they want and often these reactions can be violent. Teaching them as early as possible to manage these kinds of situations is key to the emotional education of boys.

In the same way, it is also more common that they go from extreme affection to the roughest behavior in a few seconds when they feel like something is lacking, displeasing or annoying.

All of these reactions are clues that their emotional management matures more slowly. Their brains consolidate theses areas in a way that is slower than that of girls. We need to be vigilant to the complex universe of boys.

Take your son’s natural affection to its potencial intelligently

Your son comes from the “mill” with infinite love, but also with infinite needs. They are caring by nature and they also need your care, your arms, your closeness in an intense way from the day they come into the world.

Now, since we have seen that boys are generally more sensitive than girls, the last thing we should say to them is “boys don’t cry, boys are brave, and you can solve your problems alone.”

If we start doing this, we lift up walls around their emotional needs creating turbulence. From this moment on the child will learn that speaking about their desires, needs, fears and problems is something that is unacceptable. We are also giving up their chance to be assertive and empathetic.

What is the point of all these walls? Absolutely nothing. The upbringing and education of our boys should be accompanied by sensitive treatment.

If your child comes into the world already being affectionate, then empower that quality. Help him grow up to have excellent emotional intelligence.

You will be investing in happiness.

Sometimes, too much importance is given to children knowing how to read, write, and solve math problems. But what about…

Emotional education
Why You Shouldn't Let Your Child Win at Games

The experience of winning or losing in almost any activity is very important in our society. It's not only the…

Parenting
How to Encourage Students to Ask Questions to Improve

Albert Bandura is a world-renowned psychologist from Canada, known for his contributions to personality and cognitive psychology. According to Albert…

Parenting
The Participation of Students in Their Education

The participation of students in their education encourages autonomy and self-regulation in children. It's important for education centers to provide…

Raising a child
Everything You Need to Know About Co-Teaching

Schools should be places of exchange and collaboration in which people learn from each other. In this regard, it’s important…

Being a parent isn't easy. Caring for and educating a child is a major responsibility that requires a great deal…

Parenting
All About Progressive Education

The main characteristic of progressive education was that it was broad and complex and had disparate ideological orientations. In other…

Adolescence is a period where cognitive development becomes complete and individuals form their own identity. During this stage, young people start…

Emotional education
3 Activities to Address Emotions with Your Children

Sometimes, too much importance is given to children knowing how to read, write, and solve math problems. But what about…