A Baby's First Words: Which Are the Most Common Ones?

Do you remember your baby's first words? Find out if it's among the most common first words in babies. 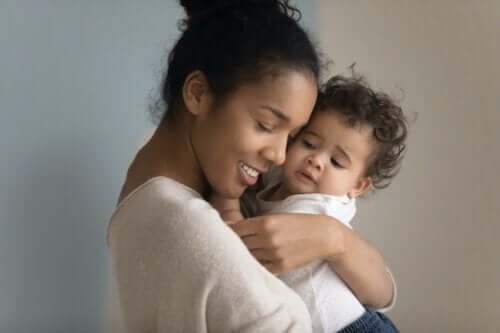 Starting to talk is one of the great milestones in a baby’s development, and it’s a moment that mothers and fathers greatly look forward to. In fact, most of them remember their baby’s first words fondly.

Usually, between 11 and 18 months of age, and sometimes even earlier, babies say their first word(s). But, of course, every child is different and learns to talk at his or her own pace. Although not all babies start out by saying the same words, there are some more common ones.

In the following article, we’ll discover a baby’s first words when they enter the world of verbal communication.

The first words mark a before and after point in a child’s life, but also a mother’s and father’s. From that moment on, the opportunities for communication multiply.

What are the most common baby’s first words?

The first words children say are directly related to their own experiences in the immediate environment, especially within the family unit.

The words most often repeated by adults, especially parents or primary caregivers, are usually the first words in an infant’s vocabulary.

Generally, all mothers and fathers communicate in a similar way with their little ones during the first months of life. That’s why there are some words babies tend to choose as their initial ones. Here’s a list of the most common ones.

Many children’s first words are “mama” and “dadda.” Besides being simple and easy to pronounce, as they’re formed by the repetition of two equal syllables, they’re terms used to designate the closest family members, whom the babies are used to interacting with.

“Yes” and “no” are two of the first words most often heard by babies since the time they’re born. So, whether through gestures or words, babies quickly learn to express affirmations or denials, which, for many, is the way to launch their vocabulary repertoire.

One of the basic needs a human being has is to be fed. So, it’s not surprising that some babies choose to say the name of food or something related to when they eat as the first word, such as “water”, “ba ba” (for their bottle).

It’s also common for little ones to say some kind of useful expression to receive food, such as “give me”, “I want”, “more”, etc.

Greetings are a sign of politeness and courtesy. It’s a social norm that’s transmitted from generation to generation. Thus, many babies who have acquired the habit of greeting try to pronounce “hello” or “bye bye” as their first word.

In some cases, a child’s first word isn’t a word that appears in the dictionary, but an onomatopoeic word that’s used to name something. For example, “ruff ruff” for a dog, or “meow” when referring to a cat.

The family is the natural context in which children grow and develop all their abilities. Because of this, it’s essential for it to be as enriching and stimulating as possible.

So, when you’re encouraging your child to say their first words, what should you do? Well, it’s important that mothers and fathers establish constant verbal communication with the little one right from when they’re born.

As they get older, this way of communicating should be clearer and clearer. Make sure you speak in a very expressive way, and maintain a high level of eye contact.

After some time conversing in this way and hoping your child will speak, one day, when you least expect it, you’ll hear your child say their first word. It’s an unforgettable moment that’s worth remembering for a lifetime!

There are various different approaches or perspectives that have explained the process of language development. Today we'll look at the…

Your baby's first words
Does My Child Need Speech Therapy?

When a child doesn't reach a milestone on time, their parents can feel anxious and concerned that they aren’t developing…

Your baby's first words
The Development of Language in Babies

Language helps us communicate, but the development of language in babies is a long and complex process. Today we'll take…