How to Address Emotions in Children with Music

Music has the ability to influence our emotions. In this article, we'll talk about how to address emotions in children through music. 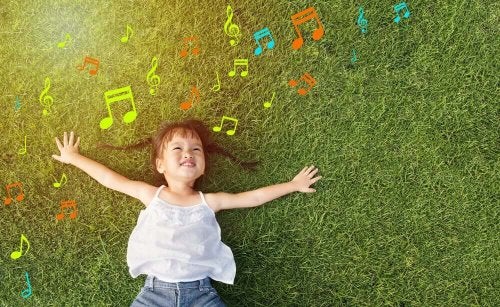 We all have a personal connection to music. When listening to music, we often notice how it can change our mood and influence the way we feel. In fact, one of the most common ways that music is used is to regulate emotions and moods (Sloboda, 2010). With this in mind, it’s clearly possible to use music to address emotions in children.

The connection with emotional regulation induced by music is mostly formed during adolescence and early adulthood. This connection is closely related to the development of identity and the influence of peer groups. In other words, most people’s favorite songs and artists are those they listened to with their friends in high school and college.

But, in reality, the influence of music and its relationship with emotions begins much earlier. Children are naturally attracted to music since they’re very small. In addition, you can use music to influence children’s emotions, even in early childhood.

In a study recently published in a special issue of Frontier in Human Neuroscience, experts Kimberly Sena Moore and Deanna Hanson-Abromeit studied how music can be structured to facilitate emotional changes in children from preschool. Let’s take a look at it.

Below, we explain how you can use music to influence a child’s emotional state and address children’s emotions.

One way can be to play background music to make any environment more peaceful. In this regard, choose slow music that has no lyrics at low volumes. Play music for five to seven minutes during any transition.

Another way might be to select several transition songs. For example, you can have a specific song for bedtime, a song to wake them up, and a song for teeth brushing time. You don’t need to worry about how this song sounds; it’s simply a way of playing with your child. In addition, you can choose the melody of any song and change its lyrics.

Children love to play. They have fun, socialize, and learn with games. Thus, a second way to influence children’s emotions is with music games.

You can include sound exploration in any music game. You can create rhythms with the objects you find in a room or dance to music.

Another music game you can try is to sing along with your children. Sing fun or silly songs or songs that your child likes… It’s all about having fun.

There are times to play and times to be quiet and rest. You can use music to calm down a child when they’re angry or upset or if you want to make them feel better. Also, when they’re too hyperactive and you want them to calm down, music can help with this. Choose a quiet song or a song your child really likes.

In addition, if you sing along to the song you choose, this will remind them of the connection they share with you. This can make them calm down faster.

In short, don’t forget the potential importance of music in a child’s development and emotions. It’s a great tool that can facilitate several day-to-day activities.

The Importance of Music Class in School
Music class has shown great results in children's development. It's crucial for schools not to forget the importance of music in education. Read more »
Link copied!
Interesting Articles
Emotional education
Solomon Syndrome in Children: What Is It? How Can You Avoid it?