Anger in Teens: Types and Causes

It's normal to see anger in teens, but it's important to learn how to control it. That way, it doesn't become habitual or affect their life and development. 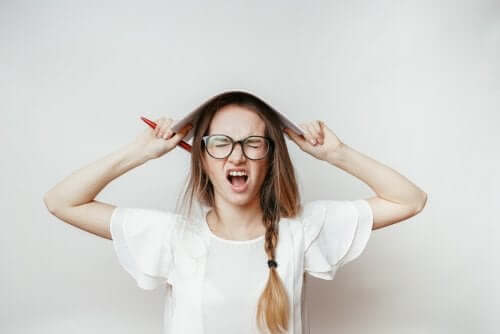 Everybody needs relationships with other people. Therefore, as kids grow up, they need to learn to discover themselves and form who they want to be. They start to create their personality and figure out their emotions. That’s why we want to talk anger in teens in the following article.

What causes anger in teens?

Anger in teens is completely normal. Being a teenager isn’t easy. At that stage, they’re going through physical and psychological changes, as well as trying to get to know each other. In addition, they’re trying to identify their tastes and characteristics.

As teens grow, they develop their own personalities. Music, television, classmates and family can influence the kind of person you will be. Also, when people grow up being excluded or don’t socialize, they can start to feel prejudice and distrust others.

Teenagers can act out from anger, and be aggressive and negative toward others. However, this is usually because they never learned to live with others or tolerate other points of view.

Types of anger in teens

This type of anger in teens is easy to recognize since it’s anger that teenagers show. They might be aggressive and disruptive, causing them to have problems in their performance, both at school and at home.

They might have good relationships with people of the same sex. However, they might not get along with relatives or people of the opposite sex. This kind of anger prevents teens from having emotional stability. This is because every little thing can change their mood.

In this case, teenagers often hide their anger. This can cause a few different things – some positive and others not so much. For example, teens who suppress their anger are usually more withdrawn and isolated.

In fact, although they aren’t completely alone, social groups don’t always accept them easily either. It’s usually easier for them to get along with people of the opposite sex. Since they aren’t very independent, they like to stay close to their family.

Finally, teens who have this type of anger try to solve their problems calmly. They have good relationships with their relatives, as well as both sexes. However, they have a better relationship with their friends than their parents. In fact, this is natural because teens and adults see things differently.

Generally, these teenagers have a better relationship with their parents than those with the other kinds of anger. As a result, they have a better family environment because they have strong emotional bonds. They tend to have more positive qualities, and are generally more understanding towards each other.

Teens with this kind of anger tend to be much more emotionally stable than the previous ones. Therefore, they have much better mental and physical health.

Factors that influence anger in teens

Anger in teens can appear because of two main factors. First, they may have experienced something bad in their childhood or adolescence. Additionally, they might have had a bad fight or a different momentary setback.

Regardless of the reason, parents can help their teens reduce or get rid of their anger. They can help them channel that negative energy and transform it into something positive.

For example, teens could try playing sports, learning an instrument or just listening to music. In addition, talking to them and putting yourself in their shoes helps as well.

The Psychological Consequences of Puberty
Puberty is the developmental stage marking the transition between childhood and adulthood. In this article, we'll look at the psychological consequences. Read more »
Link copied!
Interesting Articles
Teenage psychology
Consequences of Child Sexual Abuse