Should You Force Your Children to Display Affection?

Many experts have discussed if it's positive or negative to force children to display affection. During childhood, children learn a lot of things that will help them in the future. Acting in the best way will bring great benefits. 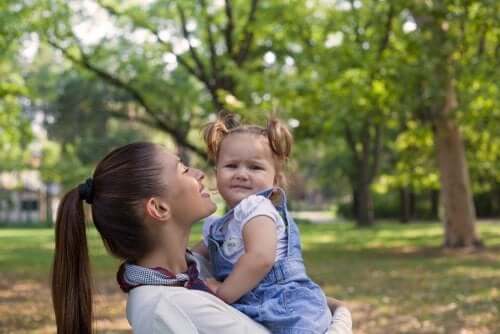 The way in which children act says a lot about their parents. This is what many people believe around the world. However, although it’s important to teach children to greet people respectfully, you shouldn’t force them to display affection. Giving children the respect they deserve contributes to a healthy upbringing.

Below, discover some of the reasons why this is uncomfortable and how it affects personal boundaries.

Displays of affection by children is a widespread, worldwide practice. It’s even considered impolite or rude if children don’t show affection. Although it’s delightful to enjoy children’s love, you shouldn’t force it. If you force them to display affection, you unconsciously teach them a disguised way to get out of uncomfortable situations.

Moreover, experts recommend that parents teach their children boundaries and control over their bodies since they’re very young. It’s necessary to let them know that no one should touch them if they don’t want them to and that people should respect their body.

Therefore, if you force your children to display affection, the message this conveys can confuse them. Thus, pressuring children to do so can lead them to give in to unhealthy actions, particularly in a sexual way.

Three reasons why you shouldn’t force children to display affection

Modern society must change the concept that a polite child is one who gives hugs and kisses. It’s necessary to teach children manners since they’re very young, such as saying “Good morning”, “Good afternoon”, and “Goodbye” and being attentive in conversations, among other courtesies.

However, forcing children to display affection can be counterproductive due to the following reasons:

It’s a matter of emotions and feelings

Children are taught to show affection, love, and warmth through displays such as kisses and hugs. Forcing children to display affection is a way of telling them that their feelings are worthless. Over time, it’ll be difficult for them to express their emotions appropriately and, instead, will learn to do so in a cold and mechanical way.

Forcing your children to display affection to others when they’re only used to doing so with their family can make them uncomfortable. Hugs, kisses, and other displays of love and affection aren’t social actions.

Just think about it. If it’s hard for adults to display affection to certain people, it’s even harder for a child to do so.

Displays of affection have limits

As we already suggested, forcing children to display affection sends them the message that, under pressure, they don’t have authority over their body. This leaves them vulnerable to child abuse, a common problem in recent years. You must respect their decision to display their love and affection to whoever they choose.

What to do: Instead of forcing your children to display affection

The role of parents is to guide their children during their growth process in order for them to develop their personality. Therefore, you should show them that they should respond depending on what they feel is right. You can recommend your child to give handshakes and greet people politely, for example.

You can also ask them, “How do you want to greet your aunt? Do you want to kiss her on the cheek?” If your child refuses, don’t pressure nor insist.

Avoid resorting to blackmail and manipulation. Instead, show your children that affection can’t be bought. On the contrary, show them that it’s earned. Displays of affection should be voluntary, never forced.

Over time, your child will get used to social models and constructs and will start differentiating courtesies from displays of affection. If you do it, your child will imitate you and adapt.

However, while children are young, they should know they have the right to say “NO”, as well as ask questions and express what they feel.

In conclusion, it isn’t a good idea to force children to display affection because it can jeopardize their process of discovering their body’s limits. It also positively affects their views about displays of affection. Be patient, as this is a phase that will pass quickly and leave a lifelong lesson.

How Lack of Affection Affects Children
In this article we'll take a look how lack of affection affects children. There are a number of negative consequences. Take note. Read more »
Link copied!
Interesting Articles
Emotional education
Solomon Syndrome in Children: What Is It? How Can You Avoid it?