Children's Movies that Deal with Loss and Grief

Death is a part of life, and grief is a natural process. If you want to transmit this information to children, children's films are a valuable resource. 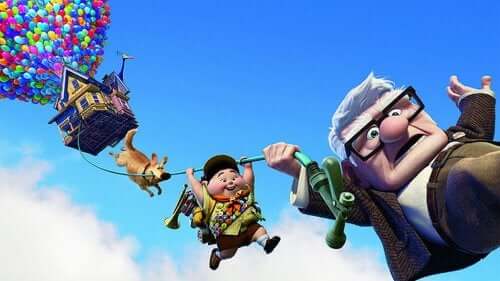 In the quest to protect children from the painful aspects of life, parents sometimes choose not to discuss certain important issues. However, despite their intentions, children will have to deal with tough situations sooner or later. Thus, it’s preferable that, as parents, you teach them how to deal with them. In this article, we’ll share three children’s movies that deal with loss and grief.

From pets to relatives, it’s possible that, at some point in their childhood, your children will have to experience the death of a loved one. This is an issue that even adults find difficult to cope with. However, not dealing with it properly can have severe consequences. Therefore, you need to help children approach the end of life in an adaptive way.

Why are movies that deal with loss and grief so useful?

The audiovisual world is enormously appealing to children. They love listening to the narration that accompanies the spectacle of colors, sounds, and endearing characters. Therefore, children’s films are a valuable resource to address important issues, such as loss and grief, with children in a natural way. They encourage children to share their thoughts and allow you to share yours with them.

It’s an important value transmission element and a way to learn coping strategies, because the protagonists serve as role models to ensure that children have a reference when they have to face a similar situation.

Children’s movies that deal with loss and grief

This classic Disney film has a very strong and hopeful message. After witnessing his father’s death, Simba, a young lion cub, alienates himself from his family, as he’s in a deep state of guilt and sadness. Throughout his journey across the savannah, he learns loyalty, support, and friendship. But above all, he discovers that no one dies entirely.

The values, memories, and lessons his father left him before his death accompany young Simba and guide him on his way. Finally, he understands that his father never died because he’ll live forever in his heart and stars. In addition, he finds the strength to return home with his loved ones and make a beautiful life for himself.

With this fantastic production, Pixar makes death colorful. In many cultures, when someone dies, people submerge themselves in gray cemeteries, black outfits, and silence. The deceased person’s life becomes a taboo subject nobody talks about, as it only causes pain and discomfort.

In Coco, you’re invited to reunite life and death (as an indissoluble whole) and celebrate the latter with affection and gratitude due to the time you were able to spend with your loved one.

The film reflects the deep-rooted Mexican tradition of the Day of the Dead, in which people decorate altars and offerings dedicated to the loved ones who departed to the other world. It gives us a colorful perspective on loss and bereavement and presents grief as a shared and expressed process, rather than as a dark, quiet, and lonely place.

In this film, through the character Carl, you’re introduced to the devastation a person can feel when they lose someone they love. After the death of his wife, Carl feels that his life has ended as well. He’s sad, lonely, and lost. He becomes a reclusive and irascible person who has a house full of memories that he clings to tightly.

However, when he least expects it, Russell appears in his life to show him that’s it’s worth it to move on. Through this new bond the old man establishes with the enthusiastic 8-year-old child, Carl finally deals with the loss of his wife and lets her go. He understands that the unconditional love they shared will never disappear and that he can continue living.

7 Movies to Help Children Develop Emotional Intelligence
Films are one of the most effective ways of educating children. There are many movies that help children develop emotional intelligence. Read more »
Link copied!
Interesting Articles
Emotional education
Sitting Still Like a Frog: Meditation for Kids

Emotional education
Emotions in the Classroom: What You Should Know

Lots of people have written about and discussed the need to deal with emotions in the classroom. In fact, it's…

Emotional education
Stories About Envy to Read with Children

Even if you try to prevent it, it's inevitable that your children will have to deal with negative emotions. Life…

Emotional education
Toxic Shame in Children: How Do They Develop It?

It's common to feel ashamed sometimes. This is a normal thing that sometimes makes us sad when our failures are…