Why You Shouldn't Let Your Child Win at Games

Many psychologists are clear about the fact that losing teaches us more than winning. Of course, it can make us sad to lose, but it's better to start knowing how to manage that sadness as children than never knowing how to do it. Today, we're going to look at the reasons why you shouldn't let your child win at games. 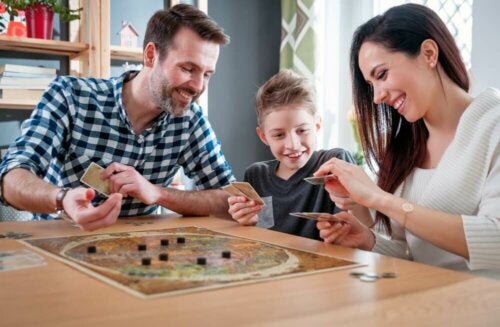 The experience of winning or losing in almost any activity is very important in our society. It’s not only the act itself, but also the way we handle the outcome and how we participate. So, that’s why we think it’s important that we look at reasons why you shouldn’t let your child win at games.

We have to consider that, if we let our child win all the time or even cheat, then we may be building a little tyrant who’s never willing to put up with things not being the way they want them to be. That may happen because they haven’t gotten used to things going wrong for them.

Much of our capacity to accept life’s triumphs and defeats as adults is fostered in us as children. Whether it’s a board game or a debate, sometimes it’s very tempting to let our child win.

A child shouldn’t always be allowed to have (rigged) victories. Whether it’s a simple card game, an argument, or a serious conversation, allowing our child to win – if he or she hasn’t done it fairly – does more harm than good.

Those small victories that seem so innocuous are setting a damaging precedent. Not only for your child, but also for your relationship with them. Letting a child win affects a relationship dramatically.

A child needs to see a parent as someone who’s in control, and you need to keep in mind that a child knows when he or she hasn’t won legitimately. They can sit back, watch, and see that they are in control.

The worrying thing is that the cumulative effect of all these victories can be quite serious. If the child believes they’re in control, then this can make them very anxious. Children need to know that a parent can step in and be strong.

You must also keep in mind that going to the other extreme – being too harsh and critical of a child’s every attempt to do something – is equally damaging. Receiving constant criticism can make the child think that we believe criticism is the norm. This should not be the case.

As adults, there’s something unpleasant about someone who can’t handle victory or defeat with a certain grace. Losing is something that very few people won’t experience, especially as adults. So, teaching a child strategies to cope with that loss is very important.

When you play a game with a child, it’s not just about winning or losing. It’s about teaching them to be a good winner or loser. They’re never going to feel proud if they know they’ve won a rigged game. A child who never loses will be a child who never learns to face adversity.

Today’s approaches to parenting are virtually unrecognizable from what they were half a century ago. We can say that, these days, “disciplinary” education has evolved into a more “considerate” one, and this is a positive thing. However, we need to ensure that we don’t go to extremes.

Some parents are afraid that their way of disciplining will resemble the old authoritarian forms of “do as I say.” Parents now want a less conflictive relationship with their children. However, it’s important to work through society’s rules with your children, and winning or losing is part of that.

Help them to learn to win and lose

Board games are very good for children’s development. So, in order to get them involved, you should start by choosing a short, random game that they can win on their own. It’s best to avoid games where, as adults, we’ll have a clear advantage.

It’s OK to let them win the first two rounds. Children get bored and lose interest if they lose on their first few attempts. So, we can let them have a couple of wins before letting them lose fairly.

We have to be a good role model. If you lose, try to be positive about it. We can put it simply: “Too bad! I’ll just have to try again”; “Let’s play again, I’ll try to do better this time.” It’s important for them to see that you’ve lost, but it’s not the end of the world.

Parents sometimes get emotionally involved in games and can be worse at losing than the children! You need to control this! You have to teach your child how to play, how to win, and how to lose. So, now it’s time to put this into practice and play some games with your children!

5 Board Games for Improving Attention
There are a number of great board games for improving attention in children. Today we'll suggest a few to enjoy with your family. Read more »
Link copied!
Interesting Articles
Emotional education
Solomon Syndrome in Children: What Is It? How Can You Avoid it?