Board Games to Play as a Family

Board games are a great way to have fun as a family. In this article, discover some of the best ones. 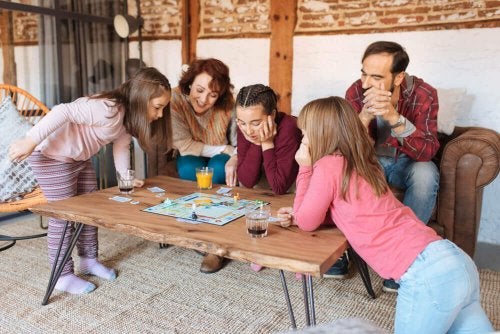 A simple board game, puzzle, or card game can help a family bond in a traditional way. Board games lead to real face-to-face interactions and teamwork. Today, we’re going to talk about some board games to play as a family.

These games are experiencing a rebirth, as we’re seeing the revival of some classic games and very interesting new games. Board games allow people to develop their patience, social skills, attention span, and emotional intelligence.

In addition, while you’re playing board games as a family, you’ll forget about screens for a while, which is very positive. Therefore, they’re great options to spend time and have fun as a family. These are our recommendations for board games to play as a family.

Board games to play as a family

This game is for ages seven and up and can be played by two to five players. It’s a safe bet and is considered a classic. Players make the French city of Carcassonne by laying tiles to form paths, farms, castles, and cloisters. Pieces called “followers” are placed to score points when the structures are completed.

Create your own territory, use knights, bandits, monks, or peasants, and score more points than the other players.

This is a very fun card game. Its creator ensures that players can learn the rules in two minutes. The cards are very funny and absurd.

Two to five players can play at once and it hooks people of all ages. The original version of the game is recommended for ages seven and up. Each game lasts approximately 15 minutes. When it ends, we’re sure you’re going to want to play again. It’s hard to stop!

This is an increasingly popular game, as board game fans love it. It’s dynamic, fun, and creative. Three to six people can play at once and it’s for players ages eight and up. A game lasts approximately 30 minutes.

The mechanics are simple. All the players have some cards that are illustrated in an original way (they’re very nice illustrations). In each turn, a player acts as a storyteller. The storyteller chooses one of their cards, saying a phrase that identifies it (or word or even sound).

The other players mix one of their cards with the storyteller’s and try to guess which card they described. Although it seems very easy, the illustrations lead to very varied and original descriptions.

Virus, one of the favorite board games to play as a family

This is a game that was created and edited by three Spanish entrepreneurs, and it’s becoming quite popular among gamers. Virus is a card game designed for two to six people to play at once. It’s for players age eight and up and each game lasts approximately 20 minutes.

The game’s premise is that a virus has spread, so players should avoid spreading it and send the virus to other players. Virus is a very strategic game that’s a lot of fun.

We’ve all played Monopoly at least once or at least know about it. It’s a classic among the classics. In Monopoly, you have to buy and sell properties and make life a bit impossible for the other players.

Finally, something important to remember when you’re playing board games as a family is that the main goal is to have fun and enjoy quality time together. But remember you shouldn’t always let your children win because just because – they also need to learn to lose and, thus, begin to tolerate frustration. The sooner they start doing this, the better.

Board Games and Card Games to Play During Quarantine
Right now, times are tough. But board games and card games can be a great way to help your family during the COVID-19 quarantine. Read more »
Link copied!
Interesting Articles
Activities and games for kids
The Role of Parents in Children's Sports