Friedrich Froebel and the History of the Kindergarten

We use the word "kindergarten" a lot, but did you know that the first kindergarten is around 200 years old? Read on to find out about the history of the kindergarten. 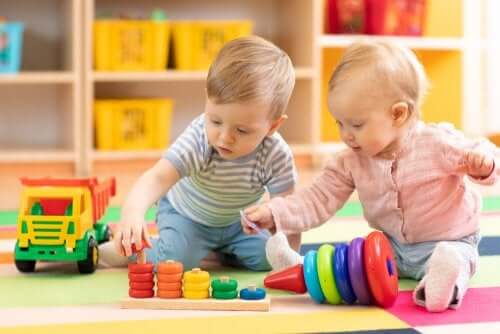 Nowadays, the importance of kindergartens as a place to meet the specific educational needs of small children is indisputable. In this article, we’ll find out about how the pedagogue Friedrich Froebel had such an important part to play in the history of the kindergarten.

Friedrich Fröebel, born on April 21, 1782, in Germany, was a German pedagogue who created the concept of kindergarten. Froebel developed a pedagogical program based on the need to attend pedagogically to the preschooler through play.

Many people consider Freobel as the founder of early childhood education. He was responsible for thinking through and organizing this special stage of a child’s education. Furthermore, he did it according to specific criteria, methodologies, resources and teaching materials.

Friedrich Froebel and the history of kindergarten

When we look at the history of the kindergarten, we see that it emerged as an alternative to traditional preschool education. It was a way of breaking with the idea of school buildings and closed architecture – places that didn’t bring the children into direct contact with their natural environment.

In addition to this, Froebel also changed the accepted ideas of the family structure, and also parenting practices. According to him, the education a child receives at home should be reinforced by a professional public education in a building set aside for the purpose.

Froebel was a disciple of Pestalozzi. He taught that it was a mother’s responsibility to carry out most of the child’s education in the family home. However, Froebel took this initial idea, and argued for an education that continues with these ideas, but one which also takes place outside the home.

Froebel was concerned with the idea of women being responsible for education in the family home, just as Pestalozzi maintained. However, he argued that there should also be a public institution responsible for the education of preschoolers.

In 1837 he opened his first kindergarten. Three years later he would call it a “kindergarten,” which means “children’s garden.” It was probably chosen because the place they used had a garden with plants, and the teacher acted as a gardener.

His pedagogical ideas continued to develop. As a result, they’ve now been put into practice all over Europe and the world, and are still widely used today.

The main objective of kindergartens was to offer a natural and inclusive education. It would then take place in an organized – but at the same time open – dynamic and flexible school area, in which children could develop rapidly.

Froebel’s pedagogical methods, which he used in the kindergartens, aimed to awaken children’s awareness of the diversity of everything around them. They did this through songs, games and toys, expressive body movements, and also cooperation with others.

He devised the ideas in order to cultivate a child’s nature and not restrict them, always giving priority to a child’s spontaneity. Thus, Froebel sought to give children a complete education, by concentrating on all aspects of their development:

What children learn in kindergarten

In order to achieve his educational objectives, Froebel developed a methodology based on the use of simple object materials. He thus created what he called “gifts” and “occupations.”

These were solid objects based on geometric figures (cubes, cylinders and spheres), with an increasing complexity. The children would use these objects as specific didactic materials to play and carry out different activities.

Froebel’s intention was that, through these materials, children would acquire manual skills and exercise their senses. At the same time, they would be learning about shapes, colors, movements, matter, as well as word association.

The “gifts” introduced the following concepts:

Final considerations on the history of kindergarten

In the history of the kindergarten, we can see that, apart from games and the work with the “gifts,” Froebel also used two other activities for his educational purposes. These activities were “kinetic” and “gardening” games. In this way, he completed the three aspects of his kindergarten activities.

Firstly, kinetic games were races, dances and actions. These allowed children to express themselves through movement. And, secondly, the gardening activities allowed children to experience how a plant grows, from the moment it’s planted until it finally blooms. They also needed to learn how to look after them to produce this growth. In this way, through gardening, Freobel tried to get children to connect with nature.