The Development of Perception in Children

The development of perception in children evolves gradually from the time they're born. In the article below, we'll explain this process. 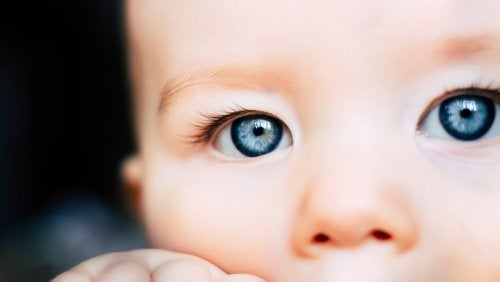 Babies grow and, little by little, develop their senses. This is the first step in the long process of the development of perception in children.

Perception changes based on experiences and neurological maturity. That’s why early stimulation is so important. Early stimulation provides situations and resources for babies to explore their environment freely.

In order to understand the world, you must first explore it. And our sensations are essential to exploration. But we need to be able to select, organize and interpret these sensations in order to create an accurate mental representation of the environment around us. This is what perception is about.

Therefore, we can say that perception is the ability to obtain information about the surrounding environment, experiencing sensations through a series of stimuli. In other words, it’s the interpretation of what one feels.

The development of perception in children

The perception of movement

The perception of movement is the most primary perception in children. In fact, a wide range of studies affirm that between the ages of 3 and 6 months, babies have a sensitivity to visual movement similar to that of adults.

The world has three spatial dimensions. But, in order for children to become aware of their position in their environment – to perceive the space around them correctly – they must recognize the following:

Therefore, based on Jean Piaget’s theory of development, children acquire space perception over the course of four stages:

Humans are capable of perceiving millions of colors. The color that we perceive depends on the level of activation of the three receptors in the retina. These receptors, called cones, perceive color through wave lengths: Short waves (blue), medium waves (green) and long waves (red).

So, the brain is constantly analyzing the percentage of light that activates each receptor in the retina and produces color vision.

However, newborn babies are unable to see with sharpness. They can only distinguish between light and shadow and perceive movements. That being said, by the time they’re one month old, they’re already sensitive to brightness and intensity. And, by four months of age, they can visualize all of the colors on the spectrum.

Stimulating the development of perception in children

There are steps that parents can take for the development of perception to take place correctly. For example, you can create stimulation areas with toys, colors, divers textures, shapes, etc. This should take place especially during a child’s infant stage.

All of this contributes to providing children with the opportunity to move and explore. In turn, this allows them to develop all of their perceptive skills and abilities.