Kinesthetic intelligence is one of the intelligences Howard Gardner defined in his theory of multiple intelligences. In this article, we’ll explain what you should know about how this intellectual capacity manifests in children. 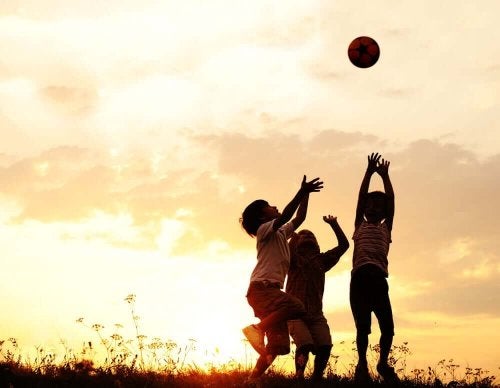 Intelligence is susceptible to change and depends on innate factors and learning. Therefore, even though each person has their limits and potential, the environment can optimize intellectual abilities.

“We all have these intelligences, that’s what makes us human beings, cognitively speaking. Yet at any particular moment, individuals differ for both genetic and experiential reasons in their respective profiles of intellectual strengths and weaknesses.”

What is kinesthetic intelligence?

Historically, experts conceived the existence of a single intelligence as an expression of cognitive ability. But psychologist Howard Gardner says that intelligence involves the necessary ability to:

In addition, this same author determines that, in fact, people combine and use at least eight different intelligences in varying degrees in personal and unique ways.

One of these is called kinesthetic intelligence, which is also called body intelligence. It’s the ability to use the entire body, or any part of the body, in order to solve problems or do activities that require physical performance. Thus, this intelligence includes the following skills:

Kinesthetic intelligence is located in the frontal lobe of the brain. Specifically, in the motor cortex. In this regard, each hemisphere controls the movements that occur on the opposite side of the body. For example, the right hemisphere gives the order to lift the left hand. Therefore, in right-handed people, the dominance of movements is usually in the left hemisphere, while it’s usually on the right in left-handed people.

Kinesthetic intelligence develops from the first years of life, since children have the need to physically explore the world and implement their knowledge, meaning that they experience feelings and sensations with their body and movements.

Thus, said capacity unites the body and mind to ensure proper physical performance. Firstly, children manifest this ability by learning to control automatic and voluntary movements. But, over the years, they acquire the skills to use their body in a differentiated and competent way.

Unfortunately, schools don’t usually consider kinesthetic skills important. Instead, they prioritize other intelligences, such as logical-mathematical and verbal-linguistic.

In addition, traditional schools tend to separate the mind from the body and theoretical from practical learning. This is a mistake, as the mind must be trained to use the body and vice versa.

Thus, we can say that a child’s kinesthetic intelligence is highly developed if they can stand out in any of the following activities:

“We aren’t all the same; we don’t all have the same kinds of minds. In other words, we’re not all distinct points on a single bell curve. Education works most effectively if these differences are taken into account rather than denied or ignored.”

Characteristics of children with kinesthetic intelligence

These children also have a very specific communication style, characterized by:

Furthermore, children with high levels of kinesthetic intelligence have a particular memory. In this regard, they usually:

Kinesthetic Learning: Definition and Benefits
When it comes to children's development and education, taking advantage of techniques likes kinesthetic learning is fundamental. Read more »
Link copied!
Interesting Articles
Raising a child
How to Explain the Water Cycle to Children