How to Deal with a Child's Temper Tantrums

Not all children are frustrated for the same reasons. By knowing the differences, we'll learn to deal with a child's tantrums. 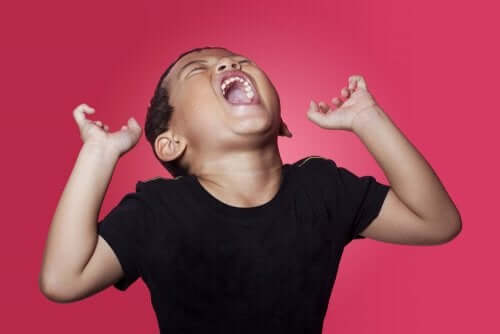 A reaction of intense anger, expressed through screaming, crying, and aggressive behavior (hitting or beating oneself, throwing things, throwing oneself on the ground, etc.) is, as we all know, defined as a tantrum. Parents may find it very difficult to deal with their child’s temper tantrums in certain situations.

Approximately half of all children exhibit such disruptive behavior on a regular basis. Adults often try to deal with them by improvising, but there’s always the possibility that their methods may not always work. This can leave the caregiver feeling helpless, and even emotionally overwhelmed.

In order to deal with children’s tantrums, it’s essential to remain calm and even ignore what’s going on. However, there are situations that spiral completely out of control and that require intervention.

Causes of tantrums in children

In the first five years of a child’s life, behavior has a mainly exploratory function. This stage is characterized by an autonomy that a child acquires progressively through trial and error. This entails a great deal of motor activity, which is encouraged or allowed by adults, who are aware of its importance.

During this time, children create their own rules of conduct, which don’t necessarily coincide with those established by society. They’re instinctive rules that lead to learning when they explore their surroundings.

In this process, the adult takes on the role of protector, as he or she has to ensure the safety of the child as they adapt to each situation. They’ll impose limits and help the children to acquire self-regulation of their own behavior, based on pre-established rules.

At this stage in their lives, children will start to throw tantrums. This is their way of showing nonconformity and rebellion towards what they interpret as a veto on their freedom to learn.

However, there are different reasons behind this type of behavior:

Factors that influence the appearance of tantrums

All external behavior is the visible aspect of the internal cognitive and emotional processes that are taking place in a child’s life. Behavior is influenced by different factors that combine to create a certain reaction. Some of these factors are:

Tips for dealing with a child’s temper tantrums

How we deal with a child’s first tantrums is very important. If we do it in the correct way, then we’ll be able to eradicate this behavior after a while. However, as we’ve already said, the success of our methods will depend on the child’s temperament.

A tantrum is an explosion of energy produced by a frustrating situation, which tends to extinguish itself if the fire isn’t “stoked up.” However, keeping ourselves out of the situation (or preventing other adults from intervening) is a big challenge.

Anticipating the causes of tantrums

The most effective way to control a child’s temper tantrums is to prevent them from happening in the first place. To anticipate this situation, we must be alert and detect what factors usually cause it to appear. We must observe factors such as:

Once we’ve determined what’s causing this explosion of frustration in the child, we have to try to control the situation and the relevant factors as much as possible, in order to try to avoid these situations.

Tips for getting rid of a child’s temper tantrums

If, despite all your efforts to prevent tantrums, you don’t succeed, here are some more tips to help you deal with your child’s temper tantrums:

The Reasons Why Children Throw Tantrums
Many parents are concerned when their children throw tantrums. However, parents can use certain methods to calm them down. Read more »
Link copied!
Interesting Articles
Childhood behavior
The Key to Success: An Activity to Motivate Children