Democratic Parenting Style: What You Should Know 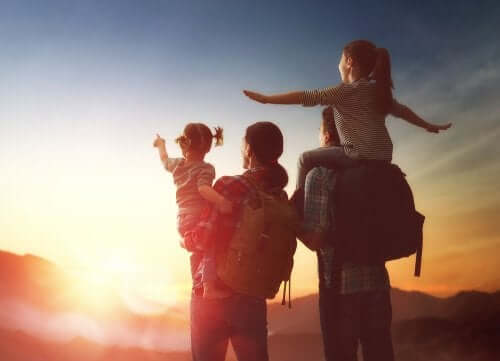 Education is determined from the earliest years of life, which is why parents have a very important and complicated responsibility. In fact, it’s been shown that the behavior that’s used to raise a child affects their development. Parenting styles are based on the way that mothers and fathers communicate and interact with their children. In this sense, it’s important to adopt a democratic parenting style.

This phrase may help you understand the importance of properly raising a child. Thus, if you make sure to properly raise your child since childhood, you can prevent the occurrence of emotional, psychological, and social problems when they become older.

There are several parenting style theories. Firstly, one of the most exhaustive is psychologist Diana Baumrind’s (1967). This author only took into account the level of parental control to define three styles: authoritarian, permissive, and authoritative.

Years later, in 1983, Maccoby and Martin reformulated this theory and suggested that different parenting styles are the result of interaction between two dimensions:

From these two characteristics, they established four parenting styles:

The characteristics of the democratic parenting style

Democratic parenting is characterized by the use of two valuable tools: dialogue and reflection. Thus, it isn’t only about teaching. It’s about explaining and making children understand rules, rights, and values through reason, avoiding authoritarian impositions.

These mothers and fathers encourage critical thinking and foster their children’s autonomy. In addition, they take their children’s needs into account and adapt to them, giving them the support and love they need.

But it isn’t about being benevolent. Instead, it’s about setting boundaries and knowing how to negotiate during conflicts. In other words, instead of abusing their power and continually resorting to punishment, parents have to try to reach an agreement with their children through communication and listening.

In this type of parenting style, the child is the protagonist of their own education. Also, they’re guided at all stages of their life to achieve good development.

The consequences of the democratic parenting style

The democratic parenting style makes children grow up with a certain personality. In this regard, this parenting style has many positive effects on children’s development. Here are some of them:

Therefore, if you want your child to grow up happy and become a free, independent, and consistent person, you must raise them democratically.

Obviously, it isn’t easy to find a balance between affection and discipline. But we assure you that your efforts will pay off. Besides, nobody said that raising children was an easy task!